BEIJING (Reuters) - A Chinese educational services provider said it had removed the head of one of its kindergarten, as allegations of child abuse at the Beijing nursery rocked the country's booming childcare industry.

It said the teacher, surnamed Liu, had been detained by district police on suspicion of abuse.

Beijing police were investigating claims of child abuse at the kindergarten in Beijing's Chaoyang district, after state-run Xinhua news agency reported they were checking allegations that children were "reportedly sexually molested, pierced by needles and given unidentified pills".

Several teachers at the kindergarten had already been suspended since Thursday.

RYB's New York-listed shares plunged 38.4 per cent on Friday as the scandal sparked outrage among parents and the public.

The second woman, a 31-year-old from Beijing, was arrested on Thursday. 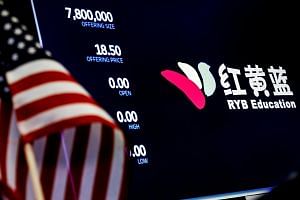 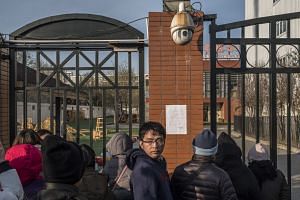 Parents said their children, some as young as three, gave accounts of a naked adult male conducting purported "medical check-ups" on unclothed pupils, other media said.

The Chaoyang district has launched an investigation into all childcare facilities in its area.

It had also dispatched officials to the kindergarten and asked the school to communicate with the parents and make sure that the children there are safe.

Founded in 1998, RYB provides early education services in China. At the end of June, the Beijing-based company was operating 80 kindergartens and had franchised an additional 175 covering 130 cities and towns in China.

It was not the first case of alleged abuse at an RYB school.

In 2015, a court in Jilin province found two teachers guilty of physically abusing children at one of its kindergartens in the city of Siping.

In that case, staff at the school on"multiple occasions used needles and intimidation tactics to abuse many of the children under their care", according to a court ruling document.

China's education ministry said on Thursday that it had begun a special investigation into the operation of kindergartens, and told education departments nationwide to take heed of "these types of incidents".

Separate cases of children in China being slapped, beaten with a stick and having their mouths sealed shut with duct tape have also gone viral and fuelled anger online.