SEOUL - More than half of single South Korean women see marriage as an option rather than a necessity, reflecting a sea change in mindsets in the space of just one generation, a poll has shown.

According to the survey of 1,287 single women and 1,096 single men aged between 20 and 44, 52.4 per cent of the female respondents said marriage was not a necessity and they were fine with staying single, Yonhap news agency reported on Sunday (July 10).

In contrast, 60.9 per cent of the men said they would walk down the aisle one day and 18.1 per cent indicated that marriage was a must, the poll showed according to Yonhap. It did not say when the survey was conducted. 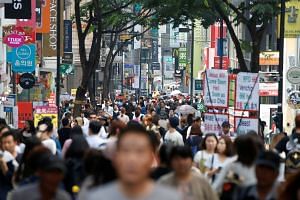 The poll, conducted by the Korea Institute for Health and Social Affairs, suggest a sharp change in the mindsets of South Koreans, especially among women, whose lot in life was to get married and stay at home only a few decades ago.

Higher education and participation in the work force, and a corresponding increase in financial independence, are the main factors for the shift, said Yonhap.