Burning paper replicas of everything a loved one could ever want in the afterlife is an enduring tradition in Hong Kong - from mundane daily life items, including pairs of socks and false teeth to high-end status symbols like cars, smartphones and designer handbags.

Gucci sent letters to store owners last month asking them not to sell paper replicas bearing Gucci-like logos, saying it was an infringement of their trademark. 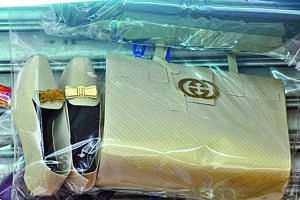 That led to criticism from some shops and customers who said the brand was interfering in an age-old custom they felt was harmless.

"We regret any misunderstandings that may have been caused and sincerely apologise to anyone we may have offended through our action," Gucci said on Friday.

The company said its letters were sent out as part of efforts to protect its global intellectual property and said it held the funeral traditions "in utmost respect".

"We trust that the funeral store owners did not have the intention to infringe Gucci's trademark. Accordingly, we did not suggest any legal action or compensation," the statement added.

It did not say whether Gucci would continue to ask shops to take the replicas off the shelves.

But a source close to the matter said most of the six stores that received the letters had agreed to stop selling the products.

"We hope to continue a positive dialogue with the sellers," the source added.

Though some store owners may have adhered to the warning, others seemed unfazed.

"These items are not used by living people, it's just to commemorate ancestors and for them to use," Mr To Chin Sung, a 65-year-old manager of a shop crammed with paper offerings, told AFP after the letters had been sent out.

He had not received one himself, although he does sell paper handbags resembling Gucci products.

"If they send us a letter, we'll respond jokingly by saying perhaps we can help send it to the underworld, and see how it's received there."

Since its arrival in Hong Kong in 1974, Gucci has opened 11 stores, including its flagship in the Central shopping and financial district.