HONG KONG – Chief Executive Carrie Lam will mark the start of her third year in office on Monday (July 1) with a crisis as her administration and protesters remain in a deadlock over the contentious extradition Bill that has been suspended indefinitely.

Tensions in the city have heightened over the past three weeks following massive rallies denouncing the proposed extradition law that would allow Hong Kong to send fugitives to mainland China for trials.

Both the government and anti-extradition protesters have been gearing up for a face-off on Monday – 22 years since the day Hong Kong was handed back to mainland China by the British.

On Sunday Chief Secretary Matthew Cheung appealed for calm in his blog, ahead of planned protests on the handover anniversary.

He said the government will learn from experience and adopt “a most humble and open-minded attitude to listen to the views of the different sectors”.

“In the next three years, the government will improve the lives of residents, develop the economy and strengthen communication with different segments of society, with particular focus on the younger generation,” he wrote.

The government will also strive to listen to the views and needs of the youth and incorporate their suggestions in policies wherever possible, Mr Cheung added.

Ahead of the anniversary, tens of thousands gathered at Tamar Park in Admiralty on Sunday to show their support to the police, holding placards that said: “Ah sir, I’ve got your back”. 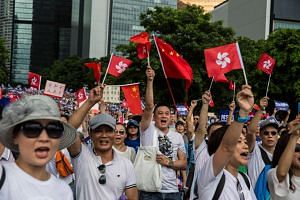 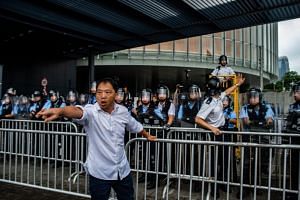 The developments come on the back of planned protests to disrupt the annual morning flag-raising ceremony at the Golden Bauhinia Square in Wan Chai this morning, as well as the annual Civil Human Rights Front march from Victoria Park in the afternoon.

In anticipation, authorities have placed the Square on lockdown and closed the nearby Convention and Exhibition Centre.

The Front said on Saturday that it believes anger over the government’s failure to fully scrap the Bill, along with recent allegations of abuse of power by the police, are likely to drive another huge turnout. This would follow the million-strong crowd on the June 9 rally and a record two million on June 16.

The march will begin in Victoria Park at 3pm, while a pro-Beijing group is expected to hold celebrations of the handover at the Park’s football pitches.

Tensions reached a flashpoint on June 12, the day when the Bill was to be read a second time, as tens of thousands of protesters dressed in black surrounded the government headquarters in Admiralty, paralysing traffic in the area and cutting off access to the Legislative Council.

The demonstration turned violent when protesters and the police clashed and rubber bullets and tear gas were fired to disperse the crowd, resulting in dozens of arrests and injuries.

Ms Bonnie Leung, the Front’s spokeswoman, said that the government had been “arrogant” and not responded to any of the demands raised by the protesters.

Mrs Lam twice apologised publicly after the series of protests but she has refused to resign and instead pleaded for another chance to serve the people.

Assistant professor Seanon Wong, of the Chinese University of Hong Kong, said that by not reacting to protesters’ demands, Mrs Lam is “basically trying to wait the issue out and hoping there’ll be fewer people on Monday”.