HONG KONG - Pro-democracy protesters in Hong Kong have adopted the song, Glory To Hong Kong, as their unofficial anthem, with the ongoing unrest showing no sign of abating.

The song, which has become a rallying cry for more democratic freedoms in the semi-autonomous Chinese territory, came to prominence on Tuesday (Sept 10) after protesters sang it at a football match during a World Cup qualifier against Iran.

Ahead of the match, the protesters also booed the Chinese national anthem.

At the same time, other protesters swamped major shopping malls across the city, singing the song as part of a series of "singing" protests.

Mr Christopher Chung, 22, said he planned to sing the new protest song over China’s communist anthem March of the Volunteers.

"I think the respect people pay when singing a national anthem should come out from one’s heart, instead of using law and rules to force people to respect it," he told AFP.

"We really dislike the Chinese national anthem," added Billy, 16, who declined to give his surname. "That’s why we want to sing an anthem that belongs to Hong Kong."

Glory To Hong Kong was composed by a local musician who wanted to be known only as Thomas, in response to an online call for a theme song to unite the protesters.

Users at LIHKG, the Hong Kong version of Reddit, contributed to the Cantonese lyrics, which include lines such as "Do you feel the rage in our cries? Rise up and speak up" and "Persevere, for we are as one".

The song has become popular, racking up some 1.3 million views on YouTube, and at least half a dozen English translations have surfaced.

AFP reported that multiple copycat videos have also been made - including one featuring an entire orchestra decked out in the helmets, goggles and gas masks worn by those on the barricades.

Weeks of protests over a now-withdrawn extradition Bill have evolved into a broader backlash against the government and greater calls for democracy.

Hong Kong returned to Chinese rule in 1997 under a "one country, two systems" formula that guarantees freedoms not enjoyed on the mainland. But many Hong Kong residents fear Beijing is steadily eroding that autonomy.

This is not the first time Hong Kong protesters have used songs to convey their message.

During the Occupy movement or Umbrella Movement in 2014, a song by Hong Kong rock band Beyond, titled Boundless Ocean Vast Skies, became the unofficial anthem because of its defiant lyrics about freedom. 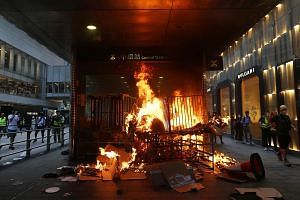 This year, the protests over the extradition Bill have turned the hymn Sing Hallelujah To The Lord and Do You Hear The People Sing? from musical Les Miserables into hits.

Mr Antony Dapiran, a Hong Kong-based lawyer who has written a book on the city’s protest movements, said songs sung in 2014 were characterised by optimism that things might change.

But in the five years since - with no concessions from Beijing and protesters embracing more confrontational tactics - the music has darkened to match the mood on the streets.

"The soundtrack of the movement is much more sombre," he told AFP. "The funereal 'Sing Hallelujah to the Lord', the 'death rattle' of protesters beating their shields and road signs, and now this solemn, defiant anthem."