BEIJING (AFP) - China's moves to combat an ageing population by relaxing decades-old curbs on family size have hit an unexpected snag: many parents are no longer interested in having more babies.

The government has indicated it will scrap its policy which limits the number of children per family through tough fines - and sometimes through forced abortions and sterilisations.

The world's most populous country introduced its one-child policy in 1979 and last tweaked it in early 2016, raising the limit to two children as the nation scrambled to rejuvenate a greying population of some 1.4 billion.

But the pent-up demand for more children has ebbed, experts say. Couples have increasingly delayed having even one child as they devote more time to other goals, such as building their careers.

The skyrocketing cost of raising children in booming China has also given many prospective parents pause.

"Lots of people want to have a second child, but the biggest problem is the financial burden," said a mother in the north-eastern city of Dalian, who wants a second and even third child but remains hesitant to bear the financial and career costs.

The proposed policy change was included in a new civil code being discussed by the Standing Committee of the National People's Congress this week. The code is set to be completed in 2020.

"Cancelling the family planning policy would mean that the right to decide how many children to have rests with couples and families," said Liu Hongyan of the China Population and Development Research Centre, a think tank under the National Health and Family Planning Commission.

This is "a manifestation of human rights in the field of reproductive health".

The official Xinhua news agency said regulations on family size were omitted from the draft law due to "changes in the country's demographic situation".

China's working-age population fell by 5.5 million last year, maintaining a downward trend that began in 2012, according to the statistics bureau.

Economists fear the nation will get old before it gets rich, leaving it trapped as a middle-income country burdened with too few workers to support an ageing populace. 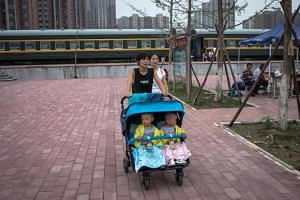 There is "heavy propaganda aimed at urban educated Han women" urging them to "marry early and have children early," said Leta Hong Fincher, author of "Betraying Big Brother: The Feminist Awakening in China", referring to the majority Han community.

From the government's perspective, Qiu Chunjuan and Xu Jinhua, who are raising two children in Shanghai, would be ideal candidates for a larger family. But the parents are not considering it.

"With the education environment in Shanghai, the economic enviroment, having two is just right," said the father, Xu.

"We're saturated now," he said. His wife Qiu said that with the cost of private school and additional classes, the pressure was already "quite big".

Hu Yanhua, a 38-year-old mother in Shanghai, said she had her hands full with just one six-year-old boy.

"I need to work and I have limited energy, so I probably won't consider it," she said.

When Beijing lifted restrictions and allowed all couples a second child, officials were expecting a flood of new births.

They received a trickle, enough to steady the falling birth count, with 17.23 million births in 2017 - but well below an official forecast of over 20 million for the year.

The white-collar mother in Dalian, who asked not to be named, worried she would fall behind in the workplace if she took time off to have a second child.

"I don't want to give up my job and the feeling of self-worth it brings," she said.