SHANGHAI (AFP) - More needs to be done to combat "loopholes and deficiencies" in the world financial system as part of the fight against terrorism, finance ministers from the G-20 group of leading economies said Saturday (Feb 27).

The officials also urged the Paris-based Financial Action Task Force (FATF) to "intensify its work on identifying, analysing and tackling terrorist financing threats, the sources and methods of funding and the use of funds". 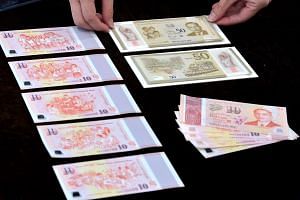 The promises - which did not include precise details - came after the head of the FATF said some government responses were still inadequate in the fight against money laundering, terrorism financing and other threats.

Since the Paris terror attacks in November, when 130 people were killed, around 50 countries have responded to a new call by the FATF - whose current blacklist includes North Korea, Afghanistan and Syria - for concrete steps to choke terror organisations funding, the body's executive secretary David Lewis told AFP.

But he said governments' use of the tools at their disposal was "much lower than it should be given the threat we face".

"Only 36 countries have ever convicted someone for terrorism financing and only 40 have used targeted financial sanctions," Lewis noted ahead of the G-20 meeting.

Targeting money flows could exploit a key vulnerability of organisations such as the Islamic State jihadist group given their nature and scale, he added.

"They require substantial amounts of money to be able to operate, because they try to provide some of the services of a state," he said.

The group also agreed to use "all policy tools" available, including monetary, fiscal and structural ones, to foster economic confidence and "preserve and strengthen the recovery".

"There are growing concerns about the risk of further downward revision" in global economic prospects, they added.

Among the rising "downside risks and vulnerabilities", they cited "volatile capital flows, a large drop of commodity prices, escalated geopolitical tensions, the shock of a potential UK exit from the European Union and a large and increasing number of refugees in some regions".

"We agree that we need to do more to achieve our common objectives for global growth," they said, adding they will use the tools at their disposal "individually and collectively".