SHANGHAI (REUTERS) - China's largest stock images provider, Visual China Group, shut its website and apologised on Friday (April 12) after it falsely claimed copyright of images such as the first photo of a black hole and China's national flag.

The company, which partners United States photo agency Getty Images, said in a post on its official Weibo account that the incident revealed its weak management and that it was cooperating with the authorities investigating the matter.

Shares in the company slumped by the maximum 10 per cent allowed.

The topic "Visual China apologises" was among the most-read items on China's Twitter-like Weibo platform on Friday, with over 250 million views.

According to its website, Visual China has over 40 million editorial images and 1.25 million videos.

Criticism of the company mounted earlier this week after Visual China put its logo over the first photo of a black hole, which was the work of a team of 200 scientists known as the Event Horizon Telescope project.

The company said it had obtained a non-exclusive editing licence from the project for media use. 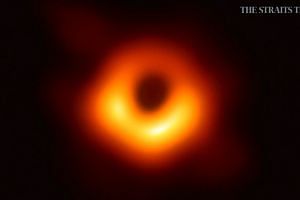 What is a black hole? A guide for earthlings

Other users also questioned why the company was asking for payment for the use of images like China's flag and logos of Chinese companies such as Baidu.

The Tianjin city branch of China's Internet watchdog said on Weibo that it had met the company's leaders on Thursday evening and ordered them to rectify its website.

Visual China acknowledged that its website had issues with non-compliant pictures which it said had been provided by contractors, and pledged to "learn from these lessons".

Political control of the Internet has tightened under President Xi Jinping, with demands that companies tighten oversight of "harmful information", which could range from vulgar to politically sensitive content.

The country's leaders have also pledged to do more to protect intellectual property rights amid complaints by the United States and other key trading partners about the theft of such assets.

Mr Elliot Papageorgiou, the Shanghai-based head of the IP practice at law firm Clyde & Co, said Visual China's use of the black hole image was embarrassing due to the photo's high profile.

"It comes at an inconvenient time because China is trying hard to get recognition for some positive steps it is taking to protect intellectual property," he said.