HONG KONG (BLOOMBERG) - As Hong Kong's protesters extend their fight beyond the skyscraper-filled city to social media, companies are suddenly finding themselves very much involved.

Demonstrators have started to single out brands they see as either for or against their cause, underscoring the intensifying politicisation of everyday life in the city.

Historic protests have gripped the financial hub for weeks, with opposition to a proposal allowing extraditions to China morphing into a mass movement against the tightening grip of Beijing on the former British colony.

Here are some of the companies embroiled in controversy:

Developer Sun Hung Kai Properties faces protesters' wrath after riot police entered its flagship mall to disperse demonstrators on Sunday (July 14) evening. The company said it "had no prior knowledge of the police operation," nor the suspension of railway services, which made it difficult for people to leave the mall in an orderly fashion.

The company "deeply regrets that the incident had caused a number of injuries in the shopping mall, as well as the inconvenience caused to customers, visitors and tenants," it said in a statement on Monday (July 15).

Those sympathetic to the protests were not convinced, launching a social media campaign calling for a boycott against all the malls owned and operated by Sun Hung Kai.

Yoshinoya Hong Kong, a unit of fast-food chain operator Yoshinoya Holdings, is getting heat for its social media post that used humorous phonetic wordplay to shame police officers involved in cracking down on the protesters.

The company deleted the post, and published another one apologising for any offence caused. It also denied reports that employees were fired because of the incident.

TVB, Hong Kong's dominant broadcaster, has come under attack on social media for its alleged pro-Beijing bias in its coverage of the protests and campaigners are urging companies to pull their commercials.

Sports-drink brand Pocari Sweat, owned by Japanese health-care company Otsuka Pharmaceutical, said it withdrew its ads from the channel, making it an instant favourite among protesters.

A spokesman for Otsuka said a "periodic review of the advertising budget" and an assessment of the "sales impact from use of different media outlets" were behind its decision to pull commercials from TVB. 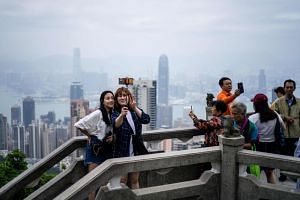 Protesters are keeping a close eye on which brands are still running commercials on TVB, maintaining an online "white list" of brands who have ceased doing so. Those still advertising on the channel are facing social media campaigns aimed at pressuring them to stop.

Those put on the white list, meanwhile, receive positive recommendations for their products and services. Yum! Brands's Pizza Hut, Vinda International Holdings's tissue brand Tempo and French cosmetics brand Clarins are among those who have been praised for ceasing to advertise on TVB, despite the fact that some brands have denied any political motivation.

Tempo, for one, said in a Facebook post its ad campaign ended "normally" on June 13 and the brand still plans to advertise on TVB going forward.

"We strongly support the approach of one country, two systems," Tempo said in the post.

While brands including Pocari Sweat have seen a positive reaction in Hong Kong from taking a stance, they risk a negative response in the much larger market of mainland China, said Jay Milliken, a senior partner at branding and marketing consulting firm Prophet.

"For those brands that choose to take a stand on a politically charged issue like the extradition bill, marketing can get very difficult very quickly," said Milliken, who is based in Hong Kong.

Still, the long-term impact for the brands is likely to be "minimal" as the majority of consumers will eventually return to their previous purchasing habits, he said.