ALMATY, Kazakhstan (AFP) - As Ms Gulzira Auelkhan toiled stitching gloves in a factory in China's troubled Xinjiang region, her managers made no secret of where her production would be sold.

"They told us openly that the gloves will be sold abroad, so we should do a good job," she recalled of a labour stint she says was enforced by Chinese "re-education" officials.

Ms Auelkhan, 39, a Chinese citizen of Kazakh descent, says she was part of a network of mostly Muslim minorities in Xinjiang who pass from what China calls "vocational training centres" to factories where they are forced to work for far less than the local minimum wage.

China says the education centres are part of its efforts to fight terrorism and separatism in Xinjiang - a region populated by mostly Muslim minority groups - and denies any use of forced labour.

But rights groups and former workers like Ms Auelkhan say the practice used against Chinese minorities is widespread and at least one foreign company has dropped its Chinese supplier over the concerns.

Ms Auelkhan says she was transferred to the glove factory at the Jiafang industrial estate in Xinjiang's Yining county after spending 15 months in two "re-education" facilities.

More than a million people from Muslim minorities - mostly ethnic Uighurs, but also Kazakhs like Ms Auelkhan, Kyrgyz and Hui - are being held in internment centres across Xinjiang, according to a United Nations panel of experts. 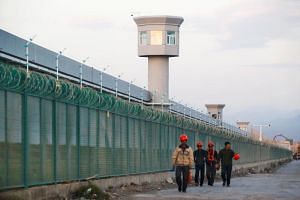 Ms Auelkhan has residency rights in Kazakhstan, but had travelled to China to see family, when she was detained and put into a re-education centre.

She said life in the camps was brutal, with residents struck over the head with electrified batons for spending more than two minutes in the bathroom.

So even though they were not free to leave, it was an improvement when she and hundreds of other camp inmates were transferred to work at the factory, Ms Auelkhan told AFP in Kazakhstan's biggest city, Almaty.

"Every day, we were taken to and from a dormitory 3km from the factory," she said, hugging her five-year-old daughter she did not see for nearly two years.

"When we were studying at the camp, they told us we would be taught a trade and work for three months," she added.

She said she was paid only 320 yuan (S$64 for close to two months of work before her time at the factory was curtailed in December 2018 and she was allowed to return to her family in Kazakhstan.

Xinjiang's average minimum wage ranges between 820 and 1,460 yuan a month, according to official statistics.

Beijing and officials in the region have fiercely denied any connection between the camps and underpaid labour.

A representative of the Xinjiang Autonomous Region Government Press Office told AFP by e-mail that there was "no labour contract between Education and Training Centres and enterprises" and "no enterprise obtains labour from training centres".

But rights groups insist the connection exists and some companies have started taking notice.

In January, Badger Sportswear, a firm based in the American state of North Carolina, announced it would stop sourcing clothing from its Xinjiang supplier, Hetian Taida, over concerns it was using forced labour linked to the "re-education" campaign.

Ms Auelkhan believes she was released from forced labour only because of a public campaign launched by her husband and supported by a Xinjiang-focused rights group in Almaty.

Originally, re-education officials had told her and other centre residents that they would be "at (their) disposal" for at least six months, she said.

Oil-rich Kazakhstan's government is a Beijing ally that positions itself as "the buckle" in China's trillion-dollar Belt and Road trade and investment agenda, a strategy for infrastructure and development projects throughout Asia, Europe and Africa.

Kazakh diplomats have entered into a dialogue with Beijing over Xinjiang, without publicly mentioning the re-education centres or criticising China's policies.

In December, a representative of Kazakhstan's foreign ministry said during a briefing that China had allowed more than 2,000 ethnic Kazakhs to travel to Kazakhstan as "a kind gesture".

The ministry refused repeated requests from AFP to clarify the remarks, which lent hope to many in Kazakhstan that they would be able to bring Xinjiang-based relatives over the border to safety.

For most, however, this has been a crushing false dawn.

During a recent visit to the Almaty office of the Ata Jurt rights group, dedicated to supporting relatives of the Xinjiang missing, AFP spoke to several Kazakhs who claim their relatives have merely swapped "re-education" for other forms of confinement.

One of them, Ms Aibota Janibek, 34, said her sister Kunikei Janibek telephoned her from Xinjiang in January, after months without contact, to confirm she had been "assigned a job" by the state at a carpet factory in Shawan county.

Ms Aibota Janibek has since lost touch with her sister, but heard from other relatives that she was transferred from the carpet factory to another position.

"A relative told me she is now at a factory that makes paper towels for airplanes," Ms Janibek said.