TOKYO (AFP) - More than 40 per cent of young Japanese single adults are virgins, a government survey has shown, and almost three-quarters of men are not in any kind of relationship.

The poll reveals the extent of sexlessness in a country where policymakers worry about low birthrates and the knock-on effect of an ageing society.

The National Institute of Population and Social Security Research quizzed more than 5,000 singletons aged 18 to 34 about their lives between the sheets.

The survey, carried out in June 2015, showed the number of people who remained chaste in Japan was increasing over time.

A similar poll conducted in 2005 found only a third of young singletons had always been celibate - out of preference or otherwise.

The 2015 survey also found that seven in 10 men were not in a relationship, while nearly six-in-ten women were going to bed alone. 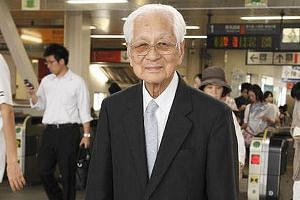 Directly comparable international statistics are difficult to come by, but Japanese people across the board appear to have less sex than those in other developed countries.

In a 2010 survey by the same government body, 68 per cent of Japanese 18-19 year olds said they were virgins; a study carried out that year in Europe by condom maker Durex found virginity rates among those aged 15-20 were much lower.

For example, fewer than 20 per cent of young Germans had not had sex by the time they hit 20, while even in socially conservative Turkey, the figure was only 37 per cent.

Japan's apparently low libido sits at odds with the impression many visitors have about the country's attitude to sex.

Images of impossibly busty - and frequently underdressed - young women are common in the ubiquitous manga comics and on billboards.

Prostitution is readily visible in even smaller cities and the country produces voluminous amounts of often eyebrow-raising pornography.

Futoshi Ishii, who heads the body that carried out the sex survey, said the root of the issue seemed to be the gulf between how people imagine life should be and how it actually turns out.

"They want to tie the knot eventually," he told the Japan Times. "But they tend to put it off as they have gaps between their ideals and the reality.

"That's why people marry later or stay single for life." he said.