BEIJING (AFP) - China is fast-tracking a foreign investment law at an unprecedented pace to meet Washington's demands on trade, but businesses fear that the time to review and raise objections on a crucial piece of legislation has been cut short.

The law will eliminate the requirement for foreign enterprises to transfer proprietary technology to Chinese joint-venture partners.

It also includes other steps to level the business playing field that Western trading partners have long demanded.

China's Parliament is expected to vote on the legislation in March - barely two months after debating a first draft.

"It is indeed unprecedented that the Bill is being moved by the NPC (National People's Congress) at such a fast pace," Mr Wang Jiangyu, an expert on Chinese law at the National University of Singapore, told AFP. "Normally it would take one to three years for a Bill to be passed and signed into law."

For example, it gives China the right to expropriate foreign investment "for the public interest", which foreign business groups fear could be abused.

A draft law was first published for comment in 2015 but was quickly shelved until it resurfaced late last year, Mr Wang said.

It was submitted to China's rubber-stamp legislature for a first reading only on Dec 23, and made available for public comment until Feb 24.

The law will probably be approved during the Parliament's roughly 10-day annual session which opens March 5, Mr Wang said.

The clock is ticking on a March 1 US-set deadline for China to address trade concerns and avert an escalation in their tariff war.

"What we feel with this piece of legislation is that it's been squeezed between the normal legal process and the negotiation table (to defuse) the trade conflict," the president of the EU Chamber of Commerce in China, Mr Mats Harborn, told AFP.

"In our view this is a little unfortunate because this is an important piece of legislation that will have an effect... on all foreign companies."

Both the EU and American chambers of commerce in China said they rushed to submit feedback from members this week.

Although the legislation covers several pain points highlighted by US President Donald Trump, including safeguarding foreign capital from government "interference", it falls short in other key areas, the business lobbies said.

"The current draft law is high-level and general" and requires more detailed guidelines and implementing measures, the American Chamber of Commerce in Beijing wrote in its feedback report, a summary of which was seen by AFP.

The December version debated by lawmakers is considerably shorter - by over 130 fewer articles - than the previous 2015 draft. 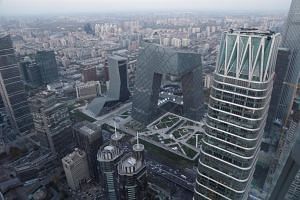 A section describing how the government will scrutinise foreign investments for potential national security concerns is limited to two sentences in the December version - simply stating that China would establish a review process and that decisions would be made according to law.

The earlier version had a beefy five-page chapter detailing how companies could appeal security rulings, plus examples of factors that could trigger a security review, said Mr Jacob Parker, vice-president of China operations at the US-China Business Council.

But the latest draft stipulates that all national security review decisions are final, implying no administrative or legal appeals were possible.

Both the EU and American trade chambers are also urging China to consider having a single Company Law to govern both foreign and domestic enterprises, as is common in many countries.

"It's now time to make sure that all companies are seen as making the same positive contribution to China when it comes to growth, employment, taxes, R&D and so on. There shouldn't be a distinction based on where the investment comes from," Mr Harborn said.