SEOUL (REUTERS) - Mr Kang Dong-wan, the head of an electronic goods supplier for South Korea's biggest global brands, says it feels like Asia's fourth-largest economy is in a recession as business conditions have deteriorated further after a tough 2018.

A trade war between China and the United States has slowed sales abroad, domestic demand remains sluggish, and operating costs have risen along with a cap on weekly working hours and a 29 per cent increase in minimum wages in the past two years.

The three big firms, whose combined revenue is equivalent to more than a fifth of South Korea's annual economic output of US$1.5 trillion (S$2.03 trillion), saw their profits tumble last year and had to cut orders placed on thousands of suppliers across the country.

Mr Kang's own suppliers are struggling. Some went bankrupt.

Mr Kang let go of 15 per cent of the staff last year and says that if the external environment continues to deteriorate, another 30 per cent could be at risk.

"The current economy seems worse than it was back in 2008, during the global financial crisis," Mr Kang said in his office in Hanam Industrial Complex in the city of Gwangju, about 270km south-west of Seoul.

"The worst scenario for us will be our unit only doing design work and our production being tossed to countries with cheaper labour such as China or Mexico." 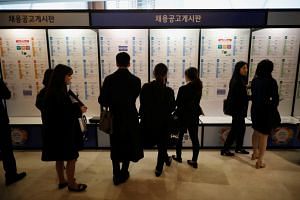 The consensus view of economists is that South Korea will avoid an outright recession - two consecutive quarters of negative growth - thanks to the government's active implementation of budgeted spending plans for the year, though the risk of a slump keeps growing with each passing month. South Korea last slipped into a recession in 2009.

While the economy shrank 0.4 per cent in the first quarter, its worst performance in a decade, the government is betting on higher fiscal spending to support a modest rebound in growth in the second quarter.

That will be little comfort to businesses which are yet to see any notable improvement in demand at home and overseas.

In fact, trading conditions appear to have deteriorated over recent quarters and have raised expectations that the Bank of Korea, which hiked interest rates in November, will likely cut them back as early as this month to boost domestic demand.

Later this week, South Korea's finance ministry is widely expected to downgrade this year's economic growth target, currently at 2.6 per cent-2.7 per cent and nearly a full percentage point above analysts' consensus.

A scan of stock exchange filings shows many firms are in the same boat as Alps Electric Korea. Operating profits for Yest Co Ltd, a semiconductor equipment manufacturer, fell 98.2 per cent year on year in the first quarter.

"Hope... it's hard to have hopes. Right now it's hard to find any clear positives for the economy," said Mr Kang Hyun-ju, a research fellow at Korea Capital Market Institute.

Both leading and lagging economic indicators suggest there will be no let-up in pressure for South Korea Inc in the short term, as the Sino-US trade war upends global supply chains and hurts demand. The won currency, seen as a proxy for global trade activity, slumped to near two-year lows in May.

The nation's exports plunged in June for their seventh consecutive month of contracting sales, while shipments to China were down nearly a quarter from last year - the worst in a decade.

A business survey on Monday showed factory activity shrank the most in four months in June as the global trade slowdown deepened, prompting companies to cut back production and shed more jobs.

A slight improvement in the job market this year after unemployment hit nine-year highs in January is being driven by state hiring, with the manufacturing and construction sectors bleeding jobs every month.

Even if fortunes turn around globally, it will take time for South Korea to recover, as a large inventory build-up in recent quarters will need to be cleared before production ramps up.

Its inventory-to-shipments ratio hit 118.5 per cent in May, the highest since September 1998 when the economy was in the throes of the Asian financial crisis.

"We can't even guess the outlook for the second half," said Mr Ahn Ki-hwaun, vice-president at Korea Semiconductor Industry Association, lamenting a "lack of demand".