HONG KONG/BEIJING (BLOOMBERG) - China hit out at a looming US defence spending Bill that includes a plan to forge closer ties with Taiwan, saying the legislation would damage US-China relations and undermine cross-strait ties.

The US Congress is preparing to pass the sweeping 2019 defence authorisation Bill, which includes provisions aimed at curtailing China's influence in Asia, reflecting a growing consensus in Washington to push back against the increasingly assertive nation.

Specifically, it calls for the Pentagon to adopt a more proactive role in assessing and strengthening Taiwan's ability to resist an invasion from China, which sees the democratically run island as a province.

China would also be permanently banned from Rim of the Pacific naval exercises - the world's largest such drills that are held once every two years - unless it reverses its military activities on reefs and rocks in the disputed South China Sea.

China says most of the waters are its sovereign territory, despite a 2016 ruling by an international tribunal that said the country's claim had no legal standing.

"If these contents are put into law, then serious damage will be done to mutual trust between China and the US, to bilateral exchanges and cooperation in many fields, and to stability across the strait," Foreign Ministry spokesman Geng Shuang told a regular briefing Wednesday in Beijing.

"We urge the US to give up its Cold War mentality and zero-sum thinking, immediately delete these negative contents, and safeguard instead of disrupting the stable development of bilateral ties." 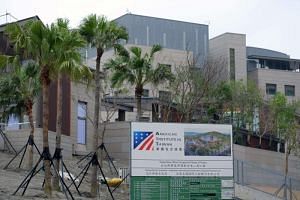 Taiwan diplomacy harder than ever in US-China tug of war

The Bill's release coincides with the opening shots of a trade war as Trump imposes billions of dollars of tariffs on Chinese goods to retaliate for what he says are unfair practices that have resulted in a huge trade imbalance with the U.S.

Trump's relationship with Taiwan has been a hot issue for China since he accepted a congratulatory phone call from President Tsai Ing-wen after his election and questioned the "one-China" principle that underpins China-US relations.

Since then, the US has approved US$1.3 billion in arms sales to Taiwan, and Trump has signed legislation to encourage senior US officials to visit the island, a move that would raise its diplomatic status.

The US has also agreed to provide technology for the island's submarine-building programme.

In a March address to China's parliament, President Xi Jinping warned that efforts to widen divisions with Taiwan would be "punished by history."

The government has ordered all airlines to stop referring to Taiwan and the former colonies of Hong Kong and Macau as countries, something the White House described as "Orwellian nonsense."

The defence Bill proposes that the US report on Taiwan's fighting readiness, provide recommendations to strengthen its forces, expand military-to-military engagement and conduct "timely" sales of US military equipment to Taiwan. It also suggests the Department of Defense consider sending a US hospital ship to Taiwan as part of annual Pacific Partnership naval exercises.

The Communist Party-run Global Times newspaper, which sometimes takes more hawkish positions that don't necessary reflect the views of the leadership, said in an article Tuesday that the US and Taiwan should keep their interactions within bounds.

"When it comes to US-Taiwan joint military exercises, port visits to the island by US warships, high-level exchanges between the two, high-ranking US military officials wandering Taiwan streets like they do in South Korea, Taiwan should not even think about it," the article said.

"It is believed that the White House would not be that silly as to actually think it can do something big in terms of Taiwan. The island is China's core interest."

Taiwan's presidential office welcomed the Bill's provisions, saying that the US remained the island's most important ally. "Taiwan sincerely thanks the US Congress for longstanding efforts on supporting Taiwan's security and other affairs," it said.

The Bill awaits final approval in the House and Senate, before it is sent to Trump. While the White House hasn't yet issued a statement on it, the president is unlikely to veto legislation hammered out by both houses.