TOKYO - The female mayor of a Japanese city invited to open a local sumo wrestling exhibition match was barred from making her speech in the ring on Friday (April 6) because of her gender.

Ms Tomoko Nakagawa, 70, made her request to the Japan Sumo Association, but was turned down and told to "give due respect to tradition", public broadcaster NHK reported.

Ms Nakagawa has been mayor of Takarazuka City in western Hyogo Prefecture since 2009.

The sumo ring - known as the dohyo in Japanese - is deemed a sacred place that "unclean" females are forbidden to enter by tradition of a sport that began in 1684 during the Edo period.

The rejection came after the Japan Sumo Association apologised for causing an uproar - and sparking a gender discrimination row - earlier this week.

On Wednesday, the referee of a tournament in Kyoto Prefecture ejected several women who had entered the ring to give first-aid treatment to the mayor of Maizuru City who had collapsed while giving a speech.

Ms Nakagawa told NHK she found out that only male mayors were allowed to give speeches inside the ring following news reports of Wednesday's incident. 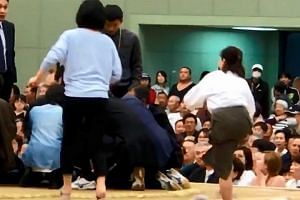 She ended up making her speech outside the ring - as she had done at last year's match.

She said: "We're both city mayors and so I absolutely cannot accept my request being rejected solely because I am a woman. It is high time for such gender equality issues to be discussed."

Japanese Prime Minister Shinzo Abe pledged at the United Nations in 2013 that he will build "a society where women can shine". But since he made that vow, Japan has been slipping down the gender equality league tables. In a World Economic Forum index of 144 nations last year, it came in at 114. In 2013, it was ranked 105th.

Maizuru mayor Ryozo Tatami, 66, had collapsed due to subarachnoid haemorrhage, a life-threatening type of stroke caused by bleeding in the area between the brain and the tissues that cover it.

At least two women rushed into the ring to administer first-aid, but were admonished by the referee over the gymnasium's loudspeaker systems and told to get out.

In a public apology, Japan Sumo Association chairman Hakkaku said the judge's announcement was "an inappropriate response because the situation could have been life-threatening".

He said the referee had panicked and was "very upset" at the time, and that the association would reflect on the incident in calibrating its responses in future.

Ms Noda, who is in charge of female empowerment issues, stressed that she holds "deep respect" for Japanese cultures, traditions and customs. But she said that these should never take precedent over life-saving activities in a life-and-death situation like the one on Wednesday.