TOKYO (AFP) - With an imperial banquet, a day at the sumo and an obligatory 18 holes, Japanese Prime Minister Shinzo Abe is again rolling out the red carpet for his "golf buddy" United States President Donald Trump.

This time, Japan seems to be hoping to position itself as a more amenable partner than China and the European Union in Washington's trade negotiations and to secure more favourable terms from the mercurial US President during his trip.

From the moment Mr Abe visited Trump Tower - before the tycoon was even sworn in - the Japanese Prime Minister's strategy has been to cozy up to Mr Trump, helped by a shared love of golf, which has seen them frequently squeeze in a round between meetings.

Mr Trump's latest visit, starting on Saturday (May 25), is no different - the Japanese reserved for their US ally the honour of being first to meet the new emperor at the dawn of a fresh imperial era and are indulging his curiosity about sumo, allowing him to present a cup to the winning wrestler.

Mr Abe has "correctly ascertained that a conflictual or demeaning relationship with Trump will result in hardline, bullying tactics by the president", noted analyst Stephen Nagy in a recent piece in the Japan Times.

The Japanese PM has "chosen to flatter and to engage in bilateral relations that resonate with the 'America First' mantra Mr Trump used during the election and now as president", said Professor Nagy from the International Christian University based in Tokyo.

Sources close to the trade talks say Tokyo's method is to avoid provoking Mr Trump, presenting itself as the most friendly of Washington's current trade negotiating partners. 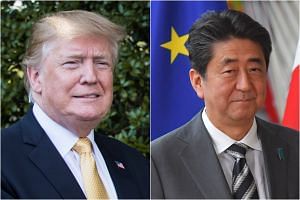 Japan, US should strengthen framework of free trade: Yomiuri Shimbun

Asia can be the moderate voice in US-China clash: Goh Chok Tong

"Japan's strategy is to proceed with negotiations in a cool-headed manner", in contrast to the aggressive tit-for-tat tariff retaliations between the US and China, Prof Shujiro Urata, a trade expert and professor at Tokyo's Waseda University, told AFP.

There has been a striking difference in tone during negotiations.

While Mr Trump has blasted China for "breaking the deal" and lashed out at the EU as "worse than China", he has said that a deal with Japan could be inked "very quickly" and talks are "moving along very nicely" amid "very good conversations" with Tokyo.

That is not to say clinching a deal between the world's first and third economies with more than US$280 billion (S$386 billion) in bilateral trade can be done with some light-hearted banter on the fairway.

Trade ministers from the two countries have been struggling to find common ground, with officials reportedly at odds on tariff cuts on industrial goods and agricultural products.

And while Mr Trump has delayed for six months a decision on adding tariffs on Japanese and EU auto imports, his declaration last week that US reliance on foreign vehicles poses a national security risk irked giants like Toyota.

Toyota chief executive officer Akio Toyoda, speaking in his capacity as chairman of the Japan Automobile Manufacturers Association, said he was "profoundly disappointed", "dismayed" and "deeply saddened" by that decision.

And no amount of flattery is likely to soothe Mr Trump's anger at the US trade deficit with Japan, with figures published on Wednesday showing it grew in April by 17.7 per cent compared to the previous year.

"Even if Abe has a personal relationship with Trump, it does not mean he will get a better deal," Mr Takahide Kiuchi, economist at Nomura Research Institute, told AFP.

At talks between US Trade Representative Robert Lighthizer and his Japanese counterpart last month, the US delegation pointedly mentioned the "very large" US$67.6 billion trade US deficit last year.

And analysts pointed out that any strategy of wooing the mercurial Trump is still risky.

Prof Nagy said Mr Abe's efforts "have helped Japan avoid most of the ire of other countries that have been targeted by the Trump administration".

But Prof Urata noted that even after a successful summit, Mr Trump "could change his opinion the next day".

And Prof Yoshinobu Yamamoto, an expert of international relations at the University of Niigata Prefecture said it was "unpredictable how Mr Trump would negotiate".

"He could call someone a friend one day and then reverse his attitude the next," Prof Yamamoto told AFP.