SEOUL (THE KOREA HERALD/ASIA NEWS NETWORK) - With the two Koreas marking the 65th anniversary of signing the armistice agreement of the Korean War, the focus is now on whether they can realise their plan of declaring an official end to the war by the end of this year.

The two Koreas have been pushing for a formal end to the war since President Moon Jae-in and North Koreas leader Kim Jong Un pledged to replace the armistice agreement with a peace treaty at the Panmunjom summit in April.

But the idea should be pursued with caution and in conjunction with progress in North Korea's denuclearisation efforts, experts said, noting that a relentless pursuit of ending the Korean War could undermine South Korea and the United States' efforts to make Pyongyang give up its nuclear programme.

"Declaring an end to the Korean War without significant progress on denuclearisation is a grave mistake," said Dr Shin Beom-chul, a senior fellow at the Asan Institute for Policy Studies, a Seoul-based research institute.

"It must happen at least when North Korea has declared its nuclear facilities. Otherwise, we could end up paying too high a price for North Korea's trivial denuclearisation measures."

Dr Shin asserted it is really a "bad idea" to agree to declare an end to the Korean War in return for North Korea's reported decision to dismantle the missile engine test site at Sohae Satellite Launching Station.

Over the past few weeks, North Korea's state-run media have called for declaring an end to the Korean War, describing the measure as a prerequisite for defusing cross-border tension and establishing a peace regime on the Korean peninsula. 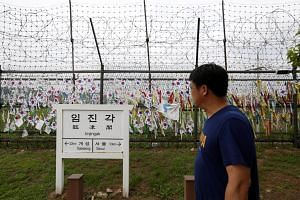 When to end the war? North Korea, US at odds over path to peace

A Korean peninsula with no demilitarised zone?

65 years after Korean War armistice, the world may be stuck with a nuclear North Korea

Pyongyang has also accused the United States of delaying the process by making unilateral demands on denuclearisation, urging South Korea to play a more active role in adopting a declaration of the Korean War this year.

Analysts said if Seoul attempts to broker a peace treaty with North Korea through the declaration of the Korean War, South Korea would become more vulnerable to North Korea as it would undermine the US troop presence in South Korea.

"I think a peace treaty would be well-intentioned, but anything with the word 'peace' in it while North Korea's nuclear posture remains unchanged is a dangerous joke," said Dr Van Jackson, a former Pentagon official who teaches at Victoria University of Wellington in New Zealand.

"For reasons of US politics, the alliance commitment would effectively end if a peace treaty came about. The US could live with that, but could South Korea?" Dr Jackson said. "Maybe Moon is secretly OK with the end of the alliance, though for political reasons he could never admit it."

The Moon administration noted that it wants to declare an end to the Korean War as soon as possible within this year, suggesting that the event could occur even before North Korea completely abandons its nuclear arsenal.

According to the Presidential Blue House, or Cheong Wa Dae, and Cabinet members, the declaration could prompt North Korea to step up denuclearisation efforts, as it offers a political guarantee for North Korea's security concerns amid the denuclearisation negotiations.

South Korea's Unification Minister Cho Myung-kyun reiterated the idea during his meeting with lawmakers on Tuesday. Asked whether the declaration could come about before North Korea's denuclearisation, Mr Cho acknowledged it is quite likely.

"It is quite ambiguous to say which one should come first," Mr Cho said, responding to lawmakers' question about where priorities should be placed between declaring an end to the Korean War and North Korea's complete denuclearisation.

"(Declaration of an end to the Korean War) can play a role in facilitating the denuclearisation process and I think we can pursue the idea even before North Korea completely abandons its nuclear programme…it is more of a political declaration and there are no legal measure involved."

Expectations had been high that the two Koreas and the US would declare an end to the Korean War following the first-ever US-North Korea summit in April. Cheong Wa Dae even envisioned a scenario where President Moon would fly to Singapore for a trilateral agreement.

Now that the Singapore summit has ended without such an agreement, speculation has been rampant that the Moon administration is now seeking to make the declaration as early as August and involve China in the process along with the US.

Some analysts suggest the declaration could take place at the UN General Assembly session in September, provided that Mr Kim manages to make his first trip to the United Nations and meets with Mr Moon, Mr Trump and Chinese President Xi Jinping.

"Considering the fact that declaration of an end to the Korean War is only a political measure, its implications can be maximised during a meeting with national leaders," said Mr Cho Seong-ryoul, a senior researcher at the Institute for National Security Strategy.

Regarding the Chinese participation in declaring an end to the Korean War, the Moon administration appears to embrace the idea. China is a signatory to the armistice agreement, though South Korea is not.

During a meeting with lawmakers on Wednesday, Foreign Minister Kang Kyung-wha said China is "an important partner to work with on the Korean issue", hinting that China could be involved with the efforts to officially end the Korean War.

Regardless of the extent of China's involvement, experts noted that South Korea should be cautious about the possibility that Beijing may use it as an opportunity to push its own agenda.

"(China's participation) is not necessary. The two Koreas could declare an end to the war. But for a peace treaty to be signed, China would have to be involved, along with the US and North Korea," Mr Ken Gause, director of the International Affairs Group at CNA, a Virginia research group.

"I don't think that is North Korea's intention (to weaken the South Korea-US alliance through the declaration), but I do agree that we need to be aware that such actions would be something that support China's national interests. The US should refrain from any discussion about removing troops from the peninsula."