TOKYO (AFP) - Three former executives from the operator of Japan's tsunami-stricken Fukushima nuclear plant went on trial on Friday (June 30) over the worst atomic accident in a generation, the only people ever to face a criminal court in connection with the 2011 meltdowns that rendered swathes of countryside uninhabitable.

The indictments are the first - and only - criminal charges stemming from the tsunami-sparked reactor meltdowns at the plant that set off the worst atomic crisis since Chernobyl in 1986. 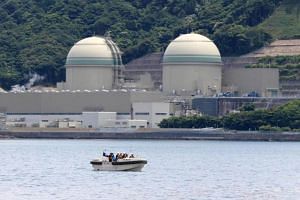 "Since the accident, nobody has been held responsible nor has it been made clear why it happened," Ms Ruiko Muto, who heads the group that pushed for the trial, told AFP outside the Tokyo District Court.

"Many people have suffered badly in ways that changed their lives. We want these men to realise how many people are feeling sadness and anger."

Japan's northeast coast following a magnitude-9.0 undersea earthquake. A report by a government panel said Tepco simulated the impact of a tsunami on the plant in 2008 and concluded that a wave of up to 15.7 m could hit the plant if a magnitude-8.3 quake occurred off the coast of Fukushima.

Executives at the company - which is facing huge clean-up and liability costs - allegedly ignored the internal study. Waves as high as 14 m swamped the reactors' cooling systems in March 2011. Although the quake-tsunami disaster left some 18,500 people dead or missing, the Fukushima accident itself is not officially recorded as having directly killed anyone.

The charges against the three Tepco executives are linked to the deaths of more than 40 hospitalised patients who were hastily evacuated from the Fukushima area and later died. More than six years after the accident, many evacuees are still living in other parts of Japan, unable or unwilling to go back home as fears over radiation persist.

A 2015 report by the International Atomic Energy Agency said a misguided faith in the complete safety of atomic power was a key factor in the Fukushima accident, pointing to weaknesses in disaster preparedness and unclear responsibilities among regulators. A parliamentary report compiled a year after the disaster said Fukushima was a man-made disaster caused by Japan's culture of "reflexive obedience".