But even that seems too much.

The former defence minister said she is unsure she will be able to introduce new legislation seeking greater tolerance of same-sex relationships amid opposition from her Liberal Democratic Party colleagues.

Members of the ruling party have publicly opposed calls for change in recent months, some warning it would slow the already anaemic birth rate.

"People asked me if I'd turned left wing," said Ms Inada, an LDP executive and an adviser to Prime Minister Shinzo Abe. "It's a tough situation for me, but I think it's a human rights issue and nothing to do with being conservative or liberal."

While other developed countries, including the United States, Australia and most of Western Europe have moved to recognise same-sex marriage, traditionalist Japan has barely budged.

Now, business groups are cautioning that the country's LGBT policies are hurting their hunt for top global talent, and activists argue the situation could become a source of embarrassment when Tokyo hosts the 2020 Summer Olympics. 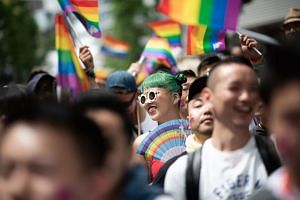 "Whether or not we recognise same-sex marriage is a problem that relates to the roots of what a family should be in our country," Mr Suga told Parliament. "So it's something that needs to be considered extremely cautiously."

Ms Inada's lonely battle to pass the legislation shows both how Japanese sensibilities may be changing and how much further advocates have to go.

Ms Inada, who led the defence ministry from August 2016 to July 2017, is better known for her justification of Japan's past colonial expansion across Asia, than for promoting minority rights.

"There is so little understanding that some conservatives think recognising LGBT people will destroy the traditional family, or reduce the birthrate," Ms Inada, who is one of just 22 women in the 283-member LDP's lower house caucus, said in an interview last month.

Like elsewhere, Japanese gay rights advocates found increasingly vocal allies among multinational corporations, who see it as a competitive issue for the world's third-largest economy.

The American Chamber of Commerce in Japan - supported by sister organisations from Australia, Canada, Ireland and Britain - went a step further in September, publishing a policy paper calling for full marriage equality.

The Japanese public appears more tolerant than the LDP, which has controlled the government for all but four years since 1955.

Homosexual relationships were long condoned among the samurai class and Buddhist monks before Japan's mid-19th century modernisation and adoption of "Western" values.

Transgender entertainers are among the biggest stars on local TV. The film Bohemian Rhapsody, which highlighted the difficulties Queen singer Freddie Mercury faced as a gay man, was the country's top-grossing movie last year.

A poll by public broadcaster NHK in 2017 - the most recent data available - found 51 per cent of respondents believed same-sex marriage should be allowed in Japan. That compared with 41 per cent who were opposed.

Still, some LDP members continue to stoke outrage from the LGBT rights advocates, such as when Mr Katsuei Hirasawa argued in a speech last month that the "nation would collapse" if everyone were gay.

Mr Abe himself said in 2015 that the country's Constitution, which requires the consent of "both sexes", didn't envisage same-sex marriage.

While a few local governments issue certificates to same-sex couples to help them overcome difficulties renting homes, or gain next-of-kin status in hospitals, the unions have no legal standing.

Ms Ai Nakajima, who was among the activists suing for marriage equality Thursday, said she was being unfairly denied the right to live in Japan with her German spouse Christina Baumann. "Tina has no right to live here and can't get a visa," Ms Nakajima said.

The main opposition Constitutional Democratic Party of Japan has submitted its own Bill that would outlaw anti-LGBT discrimination, and is discussing another to allow same-sex marriage, according to Mr Kanako Otsuji, the country's only openly gay lawmaker. Neither Bill can pass at present without support from the ruling party.

"The ball is in their court," Mr Otsuji said.

Ms Inada, a former lawyer, argues the constitutional wording was intended to give people the right to marry without securing the head of household's permission, not to exclude same-sex couples. For now, she is focused on fostering a dialogue between gay rights advocates and the ruling party.

"I invited members of the LGBT community to LDP headquarters for discussions," she said. "When I asked them if they'd ever visited before, they said they had - but only to protest outside."