HONG KONG (CHINA DAILY/ASIA NEWS NETWORK) - The United States and "pro-Taiwan independence" forces are to blame for the recent turmoil in Hong Kong, according to former Hong Kong official Rita Fan, who said links between the violent vandals and external forces have surfaced.

The observation by Mrs Fan, who was the first president of the Hong Kong SAR Legislative Council and a member of the Standing Committee of the National People's Congress, came after repeated protests over a now-suspended extradition Bill in the past two months.

The ulterior motive is to throw Hong Kong into major turmoil, the former president of the Legislative Council told China Daily in an exclusive interview on Thursday (Aug 1).

"When Hong Kong is in a chaotic state, the US can unsettle China, while people from Taiwan in favour of independence will say 'one country, two systems' is not applicable to Taiwan because it is a failure in Hong Kong," Mrs Fan said.

"Due to the rapid rise of China, the US always sees China as a big threat. If Hong Kong is unsettled, the city will lose its functions of contributing to the nation's development, with the trade dispute being one of the US tactics to unsettle China.

"In addition, the US and other Western powers can criticise China for not doing well enough to maintain implementation of 'one country, two systems' unchanged for 50 years," she said.

Thus, Mrs Fan said it was not strange that some people from Taiwan were assisting and financing the violent protesters.

Hong Kong was in shock after masked radical protesters escalated violence on July 1 by storming into the city's legislature and vandalising the complex, resulting in an early recess of the legislature and costing about HK$40 million to HK$50 million (S$7 million to S$8.8 million) to repair.

One of the lawless intruders, who took off his mask, was identified as a "pro-Hong Kong independence" graduate of the University of Hong Kong and reportedly fled to the US through Taiwan. 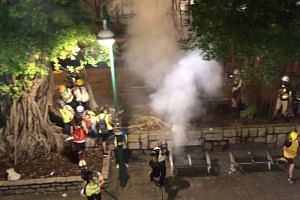 Next to protest against Hong Kong's government - its employees

It was also reported by the media that a large group of violent protesters had fled to Taiwan to seek asylum shortly after July 1. Taiwan leader Tsai Ing-wen described them as "friends from Hong Kong" and said the Taiwan authorities would consider their applications for asylum on humanitarian grounds.

Mrs Fan said the violent protesters, who were manipulated by external influences, intended to provoke and test the bottom line of the central government by attacking the Legislative Council, the building of the Liaison Office of the Central People's Government and defacing the national emblem.

The recent mayhem has also caused some to call into question liberal studies in the city.

In the wake of the violent attack on July 1, former chief executive Tung Chee-hwa, who is also vice-chairman of the National Committee of the Chinese People's Political Consultative Conference, China's top advisory body, called liberal studies a total failure.

Mrs Fan said the design of liberal studies is flawed, since there are no syllabuses or textbooks. It is up to the teachers to prepare teaching materials for students, she added.

Currently, liberal studies is a compulsory subject and examinations also are required.

"If students want to make high marks, they must follow what the teachers teach them and adapt to the style of the examination papers. In case the liberal studies teachers have strong political inclinations, they will instill anti-China and anti-establishment ideas in the mind of students."

Mrs Fan's worries have been backed by recent cases of several liberal studies teachers who were found to have posted messages full of hatred for the city's police force, according to reports. Some even cursed the children of police officers, reports said.

A veteran liberal studies teacher, Colin Lai, who was also chairman of the liberal studies committee at the Hong Kong Examinations and Assessment Authority (HKEAA), was accused of uploading anti-police messages on his social media page that read, "The whole family of black cops should die". After the case was reported, he resigned from the HKEAA but has not resigned from the school where he teaches.

Mrs Fan said Mr Lai was the chairman of the liberal studies committee at HKEAA, giving him a big say over examination papers and grading.

"That's the reason why, after the reunification in 1997, Hong Kong students' affinity for the country has decreased," she said.