TAIPEI (AFP) - As Taiwan's economy stagnates, claw crane arcades, where customers lower a grabber to try to pick up a prize from a glass box, are booming as affordable entertainment, while operators see them as a way to make a fast buck.

According to official figures, there is one claw crane outlet for every two convenience stores in Taiwan, with the number more than doubling last year to become the fourth largest tax income source in the entertainment industry.

The concept is simple - for as little as NT$10 (S$0.44), customers can manually lower a metal claw into a pile of prizes, which are usually soft toys but can also include electronic gadgets and fashion accessories.

Some claw machines stand in the corner of neighbourhood grocery stores, while others sit in rows in brightly lit arcades spread out in residential and entertainment districts alike.

A whole culture has built up around the craze - enthusiasts give online tutorials on how to most effectively manoeuvre the claw while other websites are devoted to swapping toy prizes.

For Ms Albee Chou, 34, playing the crane machine in her neighbourhood arcade in Taipei is a cheap way to find a gift for her daughter. A skilled player, she quickly picks up a few Hello Kitty storage boxes.

"It's actually cheaper than buying from a shop. Plus, it's more fun," said Ms Chou.

The toy claw evolved from "digger" machines in 1930s America. The early versions were purely mechanical in design and picked up candy. 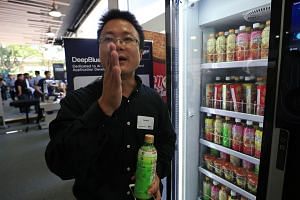 A more sophisticated electric version quickly spread to Asia in the late 1970s, and the last few years have seen a surge in their popularity in Taiwan and South Korea.

With salaries failing to keep up with the cost of living in Taiwan, players see the machines as inexpensive entertainment while operators consider them an effective investment.

Vendors usually look for a good location and stock it with claw machines, which in turn are subleased to individual operators.

Like most neighbourhood arcades, the 40 toy claws inside are sublet to various owners who then stock them with toys of their choice. Rental fees for each console range between NT$3,000 in this arcade to NT$10,000 in busy entertainment districts.

"I don't have to be in the shop 24 hours a day, which means I can keep my full-time job," said Mr Chang who works as a magazine photographer.

He makes around NT$10,000 monthly profit per machine, which is more than most operators.

The average monthly revenue for a machine is only about NT$5,000, but with Taiwan's average monthly income including bonuses stuck at NT$50,000, many feel it is a decent return.

"I make more because I am constantly looking for cheaper sources for my toys and I have many returning customers," said Mr Chang.

Finding the right prize can be key - Mr Ken Chuang, 38, has a claw machine inside the same arcade as Mr Chang. Once, he stocked it with underwear resembling Calvin Klein briefs, and found it emptied after two hours.

"Someone must have thought they were the real thing!" he laughed.

There are more than 100 Facebook pages in Taiwan dedicated to claw machines, with tens of thousands of members who share their experiences and tips on the latest trends and swap merchandise.

The craze has even prompted Taiwan's Central Bank to announce that it will issue more NT$10 coins in 2019 to meet demand sparked by the game.

Mr Lo Chi-fu, a radio presenter who hosts a financial programme, says young people are particularly drawn to supplementing poor incomes and often club together with friends to lease a machine, though he feels the number of machines in Taiwan markets has reached saturation point.

But for some it's simply about the buzz of playing.

Restaurant worker Steven Wu, in his 20s, has just spent six hours playing and admits he has spent "quite a lot".

"It's like winning the lottery," he tells AFP. "The thrill when the prize falls into the chute."