BEIJING - Philippine President Rodrigo Duterte met his Chinese counterpart Xi Jinping on Thursday (Aug 29), their eighth meeting in three years in what Manila’s top envoy in Beijing described as a high-stakes meeting with the intent “to build bridges, not to burn”.

It did not mention whether Mr Duterte had raised the 2016 ruling by a Hague arbitration tribunal, which invalidated China’s claim over most of the South China Sea, as he had pledged. Philippine officials and diplomats have yet to respond to queries by The Straits Times.

CCTV quoted Mr Xi as saying the two countries should work to promote the early realisation of the South China Sea code of conduct by 2021 or earlier.

President Xi was also quoted in Xinhua as saying: “I am willing to work with you to continue to grasp the good times and the momentum from a strategic and long-term perspective and lead the development of Sino-Philippine relations.”

The development of bilateral relations is “not only beneficial to the two countries and (our) peoples but also adds positive energy to regional peace and stability,” he added.

But he “decided that it’s time to include in the diplomatic agenda... sensitive issues that may have caused misunderstanding if it were brought up in the past”, the ambassador said, referring to The Hague ruling.

Hence, Mr Duterte is in Beijing “to build bridges, not to burn bridges with China” when he and Mr Xi held what the envoy described as “a high-stake diplomatic engagement”. It was Mr Duterte’s fifth visit to China. 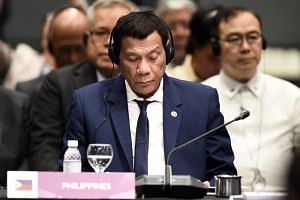 Duterte heads to China with tougher stance on disputed sea

The Philippine President has come under increasing pressure at home to press China on The Hague ruling. Manila calls the disputed waters the West Philippine Sea.

China and the Philippines have fundamental differences over the ruling, but Mr Duterte is not coming to “impose” or “provoke” China, but “to have a deeper understanding and to see ... where the gaps can be bridged”, the ambassador said.

Mr Duterte will be “trying to understand the Chinese position, while explaining our own position”, he said, adding that “we have no illusion we can solve the issue overnight”.

China’s ambassador to the Philippines, Mr Zhao Jianhua, has said Beijing’s position on the 2016 ruling - which is to ignore it - is unlikely to change.

Mr Santo Romana said the differences between the two countries “do not define the totality of the bilateral relations”.

Thanks to Mr Duterte’s detente, China has become the Philippines’ biggest trading partner and export market. Chinese tourist arrivals in the Philippines jumped nearly 20 per cent to 1.26 million last year.

Hours before his arrival in China, in the late hours of Wednesday, the owner of a Chinese fishing boat apologised in writing and offered compensation for the sinking of a Philippine fishing boat off the coast of Recto Bank on June 9. A total of 22 Philippine fishermen were rescued by a Vietnamese crew hours after the Chinese vessel fled the scene.

The Chinese government has verbally expressed regret through diplomatic channels after conducting its own investigation, but the Philippines pressed for an apology in writing, Mr Santo Romana said. Chinese apologies are rare.

On the incursions of Chinese warships into Philippine waters, the ambassador quoted the Chinese as saying they had “no hostile intent”. The Chinese are willing to discuss Philippine concerns through diplomatic channels and military-to-military to clear the air, he added.

Commenting on a joint oil exploration deal with a Chinese offer to split it 60-40 in favour the Philippines, the ambassador said: “They are willing to be flexible...and pragmatic.”

China has called on the Philippines to ban online gambling, but Mr Santo Romana said if the issue came up during the leaders’ meeting, Mr Duterte would stand his ground.

Beijing cannot “dictate” to Manila to ban all online gambling because it is legal in the Philippines and is “our sovereign decision”, the ambassador said.

Online gambling should be gradually phased out and not banned outright because it would undermine the Philippine economy, he added, pointing out that the Philippine police would work with their Chinese counterparts to curb a surge in gambling-related kidnappings of Chinese nationals.

On Friday, Mr Xi and Mr Duterte will attend the opening ceremony of the 2019 Fiba Basketball World Cup in Beijing, in what has been billed as “basketball diplomacy”.