The figure marked a year-on-year increase of 9.04 per cent in revenue generated from domestic tourists, the ministry said in a statement.

Chinese tourists made 726 million visits to parks, scenic spots, museums, concerts, and other recreational and cultural activities during the holiday, which ended on Sunday, up 9.43 per cent from a year earlier, according to the statement.

"Red tourism", which features visits to revolutionary sites, was popular during the holiday, said the ministry.

Citing one example, it said that Gutian Township in the southeastern province of Fujian - where a landmark gathering in 1929 established the principle of absolute leadership of the Communist Party of China over the army - received 256,000 tourists, a rise of 35.6 per cent year-on-year.

Data also revealed that during the holiday, over 90 per cent of tourists took part in culture-related activities, such as art festivals, music shows, cultural relic exhibitions and traditional craftsmanship shows.

More than 40 per cent visited museums, galleries, libraries or science and technology centres. 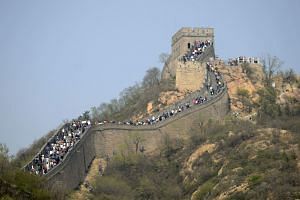 During the first half of 2018, some 2.8 billion Chinese travelled domestically - up 11.4 per cent year-on-year.

China's domestic tourism industry earned about 3.9 trillion yuan in 2016, and the country plans to raise tourism revenue to 7 trillion yuan by 2020.

Meanwhile, data complied by the China National Tourism Administration (CNTA) showed that about six million Chinese from nearly 300 cities travelled to 1,155 cities in 88 countries or regions during the National Day holiday.