WASHINGTON (WASHINGTON POST) - The world's largest supplier of telecommunications gear has shipped more smartphones than it ever has, announcing Sunday (Dec 23) that its 2018 shipments exceeded 200 million devices, despite a Trump administration crackdown and increasing scrutiny from other national governments.

"In the global smartphone market, Huawei has gone from being dismissed as a statistical 'other' to ranking among the Top 3 players in the world," Huawei said in a statement, according to CNET.

Earlier this year, Huawei topped Apple in the number of smartphone units shipped, and ranks behind only one other company, Samsung.

Huawei did not immediately respond to a request for comment.

The announcement of record-setting phone sales arrives amid increasing tensions between the company and the US government and its allies. Huawei's chief financial officer, Meng Wanzhou, was arrested in Canada this month at the request of the US government for allegedly committing fraud to evade sanctions on Iran.

Beijing has pushed for her release and suggested that her arrest was part of a US effort to gain an advantage in its ongoing trade battles with China.

Several US allies have followed the Trump administration in largely barring the use of Huawei devices. They cite a risk that the company's technology could be used to inform Chinese intelligence officers aiming to spy on or disrupt foreign governments, military agencies and corporations. 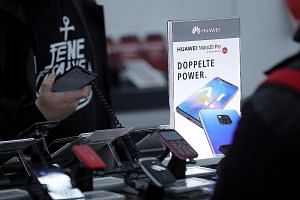 Huawei to spend $2.7b in cyber-security push

Huawei woes multiply as France risks becoming its next challenge

Australia, Britain and New Zealand have joined the US in blocking Huawei from their next-generation 5G mobile network. And earlier this month, Japan effectively banned Huawei and another Chinese tech provider, ZTE, from government contracts to prevent potential leaks of sensitive data.

Huawei and the Chinese government have cast the blacklisting as politically motivated and denied wrongdoing.

Huawei has posted significant growth even as several governments have moved against it. The company said its record-breaking shipments were largely fuelled by the demand for its P20, Honor 10 and Mate 20 smartphones.

According to November data released by the research firm IDC, Huawei clams more than 14 per cent of the global smartphone market, behind Samsung's 20 per cent, which is sliding.

The company's head of consumer business has said it's possible Huawei becomes the world's top smartphone maker by the end of next year, pointing to strong growth in Europe and China.