TOKYO - Japan's nuclear watchdog gave its nod for the restart of a tsunami-damaged nuclear reactor on Tuesday (Nov 26), hours after Pope Francis left the country.

The regulatory approval of the No. 2 reactor at Onagawa nuclear power plant in Miyagi Prefecture is controversial, given the stigma of nuclear energy.

The March 11, 2011 earthquake and tsunami caused the world's worst nuclear disaster since the 1986 Chernobyl crisis and it remains fresh in many minds. Fukushima prefecture is still struggling to shake off its "toxic" reputation.

The early nod to the Onagawa reactor by the Nuclear Regulation Authority (NRA) does not guarantee a restart, as further approvals and local consent must also be obtained. But it shines a spotlight on Japan's uneasy relationship with nuclear.

Pope Francis, leaving Japan on Tuesday after a four-day trip that included stops in the atomic bombed cities of Nagasaki and Hiroshima, warned that a nuclear accident may happen at any time, and when it does, it will "necessarily be big".

"It is a personal opinion, but I wouldn't use nuclear energy until it is totally safe," he said, reiterating earlier comments after meeting survivors of the 2011 triple tragedy.

He said: "As we think about the future of our common home, we need to realise that we cannot make purely selfish decisions, and that we have a great responsibility to future generations."

But the use of nuclear energy, for its low-carbon emissions, has been very divisive. Environment Minister Shinjiro Koizumi, appointed two months ago, said: "I would like to study how we will scrap (nuclear reactors), not how to retain them."

His father, former prime minister Junichiro Koizumi, has ditched his pro-nuclear stance - held when he was premier from 2001 to 2006 - to lead a major crusade since the 2011 disaster. 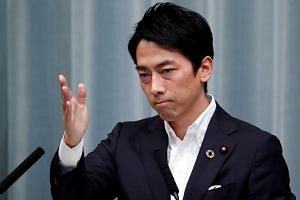 Japan needs to kick out carbon as climate risks grow

He has blasted as a "lie" the pro-nuclear stance of his protege, current Prime Minister Shinzo Abe, who has said it is a "cheap, safe and clean form of energy".

The Fukushima crisis had led to the shutdown of the country's 54 operational nuclear reactors then for relicensing under more stringent standards. The reactors provided nearly a third of Japan's energy demand.

To make up for the shortfall, Japan has relied on coal in what it labels a "clean coal" initiative that it says can limit emissions.

Still, the United Nations is not buying it. Domestic media cited government sources as saying this week that Mr Abe was barred from addressing a UN climate summit this year due to Japan's reliance on coal.

Coal will likely still constitute a substantial proportion of the expected energy mix by fiscal 2030, with Japan projecting nuclear to make up 20 to 22 per cent, renewables 22 to 24 per cent, and the rest from fossil fuel sources.

At the same time, Japan has set a goal of a 26 per cent reduction of its carbon emissions by fiscal 2030 from fiscal 2013 levels under the Paris climate agreement, in what environmental activists have described as an "unambitious" target.

Japan has cut its greenhouse gas emissions by 11.8 per cent from fiscal 2013 as of the fiscal year ending March 2019, Environment Ministry data showed on Friday. It attributed this to a warm winter, greater output by nuclear reactors and lower power consumption.

In the meantime, utilities companies have pumped in more than 5 trillion yen (S$62.4 billion) on nuclear safety measures, based on an analysis by the Mainichi Shimbun, as the government shows no signs of disavowing atomic energy even in the face of stiff public opposition.

The No. 2 reactor at Onagawa was the 16th to get the NRA's green light - with safety upgrades including a 29m high seawall - but only nine have restarted.

The Mainichi noted in an editorial on Thursday that the ballooning costs make it absurd to justify nuclear as a cheap form of clean energy.

"We must ask, then: is it realistic to press on with the safety upgrade and reactor restart policy? We cannot dispel our suspicions that the answer is, in fact, 'no'."