FENGXIAN, China (AFP) – The blast that killed eight people and injured dozens outside a kindergarten in eastern China was caused by a makeshift bomb and the assailant died in the explosion, authorities said on Friday (June 16).

The public security ministry said in a statement that the suspect was a 22-year-old man with health problems who rented a room near the kindergarten in Fengxian, where Thursday’s blast occurred.

Police found material to make a homemade explosive device at the apartment and the words “die”, “death” and “destroy” written on the wall.

The statement said the man, surnamed Xu, suffered from dysfunction of the autonomic nervous system, a disorder that can cause heart and blood pressure problems. He had dropped out of school but was employed.

The motive was not immediately known and police did not say whether the kindergarten was the target.

The explosion in Jiangsu province left victims bleeding and weeping, with images posted on state media showing some had their clothes torn off by the force of the explosion.

A survivor told broadcaster CCTV from her hospital bed that the school gate had just opened for kids to leave, though none had come out when the fireball erupted.

The woman, who was holding a baby during the interview as she sat on her bed, said she blacked out and only woke up while being treated. 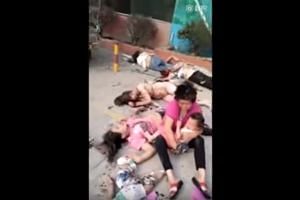 The Fengxian county government said class had not yet been dismissed and that no teachers or students were among the casualties.

At least eight people were killed and 65 injured, including eight seriously, according to authorities. Two died at the site of the explosion and six while being treated.

Pictures of the scene showed more than a dozen people outside a building, many lying on the ground and some appearing to be unconscious, including a small child.

A video posted by the People’s Daily showed emergency workers arriving at the scene with gurneys. Another showed people in hospital.

Online media reports cited a business owner near the kindergarten as saying that around 5pm local time he heard a “bang”, and found that there had been an explosion at the kindergarten entrance only 100m away.

Locals said hundreds of students attend the school and that the victims were thought to be people waiting to pick up the children.

“It’s so scary,” said a man surnamed Meng, who learned about the explosion online.

Investigators concluded that the blast was caused by an explosive, ruling out previous new reports of an accidental gas cylinder explosion.

On Friday, police officers wearing blue plastic around their shoes scoured the scene of the explosion in front of the kindergarten on the outskirts of Xuzhou city.

It is the latest in a string of tragedies to strike school children in China in recent months.

A school bus packed with kindergarten pupils erupted in flames inside a tunnel in eastern Shandong province on May 9, killing 11 children, a teacher and the driver.

Officials later said the fire was intentionally set by the driver, who was angry at losing overtime wages.

There have also been knife attacks at schools in recent years, the most recent being in January, when a man armed with a kitchen knife wounded 11 children at a kindergarten in southern China.