"The 90 cases come from (virus tests of) 207 employees who worked on the 11th floor and their families," Mayor Park Won-soon told a radio show, Yonhap reported.

"A total of 550 call centre workers on other floors of the same building are being screened," he said.

The new cases have sparked concerns of wider transmission of the virus in the metropolitan area.

In the entire metropolitan area, Seoul accounts for the bulk of the infections, with 62 patients. Incheon, which is west of Seoul, has seen 15 cases, while Gyeonggi Province has registered 13 infections, according to Mr Park.

The infection at the call centre is the biggest Covid-19 cluster seen so far in Seoul, which is home to 10 million people. The cluster poses a potential risk to the wider metropolitan area's population of 25 million.

Mr Park said two of the 207 workers at the call centre, which is located in the Shindorim neighbourhood, were followers of the Shincheonji religious cult, which has been linked to more than 60 per cent of the total infections in South Korea.

The two workers have tested negative, but Mr Park said other possible links were being investigated.

South Korea reported 242 new coronavirus cases on Wednesday, bringing the total number of infections in the country to 7,755, the Korea Centres for Disease Control and Prevention said, according to a Reuters report.

The latest numbers came a day after the rate of new infections fell to its lowest level in 11 days. 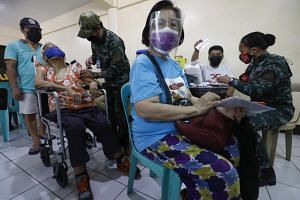