TOKYO - As nations grapple with the threat of global warming, one thing is clear. Measures to reduce or avoid negative effects are just as important as policy steps to slash greenhouse gas emissions.

For some companies, failure to adapt could put their very survival at risk.

Many food companies learnt this to their detriment after abnormal weather conditions affected their operations in spring 2017.

That was when packages of potato chips vanished from the shelves of retail outlets across Japan.

The primary reason for this was a series of typhoons that wreaked havoc with Hokkaido's potato crop in August 2016.

Not only did three typhoons make landfall, but two others also came alarmingly close to the main northern island, which is a stronghold of production for potatoes.

Hiroyuki Uemura, an executive with Hokkaido-based Calbee Potato Inc, a subsidiary of the food manufacturer Calbee Inc, recalled that his company found itself unable to continue with its business operations without a sufficient potato harvest.

The typhoons in 2016 damaged much of the potato crop that was still awaiting harvest.

"I really felt strongly how changes in the climate can prove to be a threat," Uemura said, adding that the experience taught him what global warming might portend in years to come.

At that time, Calbee Potato depended on Hokkaido potato farmers for about 80 per cent of the 300,000 tonnes it procured annually from contracted farmers.

The company quickly realised that one way to deal with the risk of weather damage was to expand the range of areas from where it purchased potatoes.

It is now working to increase the number of contracted potato farmers on the main islands of Honshu and Kyushu. It has also tried to convince owners of idle rice paddies to plant potatoes and establish a viable crop. 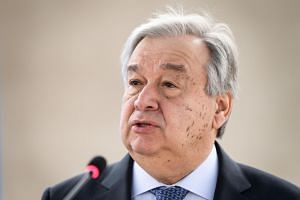 'We are losing the race' on climate catastrophe, warns UN chief

Climate change is too middle class: Here's how to fix that

The Climate Change Adaptation Law that took effect from last December was created to prevent or reduce damage from global warming.

The law also falls in line with provisions of the Paris accord on climate change that urges signatory nations to come up with policy measures or to strengthen those already in place.

In March, the Environment Ministry put together a guide aimed at private-sector companies to help them adapt to climate change. While the document noted there were still few companies in Japan actively pursuing adaptation measures, it emphasised that there were many advantages to doing so. A key argument put forward was that they needed such steps to continue to stay in business.

The guide encourages companies to weigh the costs and benefits associated with dealing with the procurement of raw materials, as well as the distribution of products and investment, when natural disasters affect their operations.

A biotechnology company called Euglena used to import the bulk of mung beans used in producing bean sprouts from China.

But it has now set up a joint venture in Bangladesh to cultivate mung beans there.

Salt damage from rising ocean levels was already a problem in that South Asian nation, but the company found a way around that by using calcium sulfate to remove salt from the ground so plants could grow.

Other companies are also taking steps to counter damage from abnormal weather patterns.

Subway operator Tokyo Metro Co is moving to seal off all of its stations by the end of fiscal 2027.

It is in the process of installing doors at station entrances above ground to prevent flooding of stations as well as adding waterproof gates to keep out water from the tunnels connecting stations.

The action plan reflects severe flooding when the Arakawa river which flows into Tokyo Bay, burst its banks in a typhoon and fears that climate change will continue to cause more damage in the future.

At the mouth of the Nikkogawa river, which serves as the border between Nagoya and Tobishima village in Aichi Prefecture, an approximately 127m-wide canal lock was completed last year at a cost of about 20 billion yen (S$254 million).

The area was devastated by high tides and flooding triggered by the September 1959 Ise Bay typhoon.

All new facilities constructed in the area after that were required to be able to withstand a similar typhoon as well as high tides triggered by other natural disasters. The lock has also been designed to deal with the threat of rising ocean levels due to climate change.

However, officials in charge of the project conceded that the locks would be unable to hold up against really powerful typhoons, underscoring the need for comprehensive evacuation measures to be in place.

This story originally appeared in The Asahi Shimbun. It is republished here as part of The Straits Times' partnership with Covering Climate Now, a global collaboration of more than 250 news outlets to strengthen coverage of the climate story.