Shimamura, a chain of affordable clothing shops, reported last week that same-store sales through July 20 fell 18 per cent from a year earlier. Many of Shimamura's customers reach the company's 1,433 locations in Japan via bicycle, rather than cars, so rainy days tend to have an outsized impact on revenue, a spokesman said.

So far, Tokyo has seen only about 44 daylight hours in July, among the least since the Japan Meteorological Agency began keeping records in 1890. There was one less Sunday this year compared with July 2018, and rain and overcast skies also appear to be keeping people at home, especially on weekends.

Given that Japan's retailers, especially Uniqlo operator Fast Retailing are sensitive to seasonal weather trends, they will probably report weaker monthly sales in the coming week, according to Mr Michael Allen, an analyst at Jefferies.

"All apparel retailers are likely to have suffered," Mr Allen wrote in a report, adding that the average temperature from July 1 to 25 was 22.7 deg C, compared with 28.3 deg C a year earlier.

Right On, an apparel company with 495 shops and a Web store, reported a 5.9 per cent decline in same-store sales through July 20, pointing to weak demand for summer clothing. Furniture retailer Nitori Holdings posted a 5.6 per cent drop in same-store sales through the same period, as fewer people bought bedding and other seasonal products. Representatives for Nitori and Right On declined to comment.

The Meteorological Agency has not yet declared an end to this year's rainy season. Last year's season was unusually short, and officially ended on June 29 for the Kanto area, which includes Tokyo.

United Arrows, which has more than a dozen fashion brands, may have been able to mitigate the impact of the weather because a fifth of their sales are online, a spokesman said. Some customers also buy fashion items earlier for autumn regardless of the recent temperature, she added. 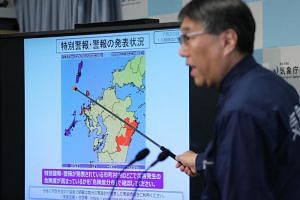 "While customer traffic at physical stores of apparel companies could be affected by the rainy season in July, shoppers likely switched to buy online," said Ms Catherine Lim, an analyst at Bloomberg Intelligence.

"The impact to overall sales for larger companies with an established e-commerce platform such as Fast Retailing may be less severe," she added.