HONG KONG (AFP) - Jogging in ranks, energetically clearing bricks, barriers and debris in a choreographed action as swift as it was disciplined, opinions were divided over the sudden appearance of Chinese soldiers on Hong Kong's streets on Saturday (Nov 16).

The debut of plain-clothes soldiers from a Chinese PLA barracks in Kowloon Tong was welcomed by some as a timely demonstration of order and power, in a city caught in a near six-month crisis.

"Very good, they're helping the weak and poor," a man who gave his name as Chu told AFP, adding the protests had gone too far.

"We can't even walk on the roads, old grannies can't go to the doctor, they're (the protesters) breaking all this stuff but I have to pay for it with my taxes."

Others perceived the cleanup as a warning to Hong Kong's pro-democracy protesters, in a city rocked by a week of intensified violence and chaos.

"We could get in big trouble," said a 24-year-old student demonstrator who identified himself by the surname Leung.

The protests are framed by fears Beijing may deploy its security forces to quell the billowing unrest.

Article 14 of the Basic Law - Hong Kong's mini-constitution since its handover from Britain to China in 1997 - allows the local government to request help from PLA garrisons in the city in the event of a public order breakdown. 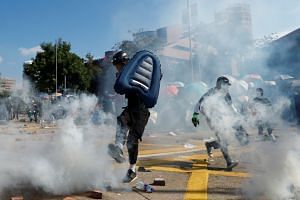 During the cleanup, the men occasionally broke off to form ranks and take orders, all under the lens of an accompanying military cameraman, before throwing bricks to the roadside and loading red buckets and trolleys with debris before pouring it into skips.

Others swept up after them with brooms and shovels in a tightly-organised exercise lasting less than an hour.

Once each group had finished, they ran back into the barracks in ranks, shouting loudly in Mandarin: "One, two, three, four."

A group of people came out to applaud shouting "Hong Kong add oil", recasting a slogan of encouragement made famous by pro-democracy protesters to support the government side.

Political analyst Dixon Sing said the intervention was "symbolic" because of the barracks proximity to the roadblocks.

"So I'm not quite sure if the PLA will extend their action similar to what we have seen to other areas," he said. "We will have to wait and see."