SHANGHAI (REUTERS) - Numerous executives at big Chinese companies have been subject to investigation or prosecution in recent years, amid a broader crackdown on corruption led by President Xi Jinping that has ensnared tens of thousands of officials.

On Tuesday (June 13), Anbang Insurance Group said its chairman Wu Xiaohui was no longer able to fulfil his duties, amid reports he had been taken away for investigation.

Following is a list of 10 other high-profile Chinese executives reported to have been caught up in investigations or prosecuted in recent years:

Tomorrow Group Billionaire Xiao was taken from a luxury Hong Kong hotel in a wheelchair on Jan 27, a source told Reuters in February. Local media reported he was taken away by mainland Chinese agents. Chinese authorities have not commented.

China Telecom's Chang was sentenced to six years in jail in May for bribery. He quit as China Telecom Corp's chairman and CEO in December 2015 after being detained by Beijing authorities for "severe disciplinary violations".

The former chairman of China Southern Airlines, China's largest airline by passenger numbers, was sentenced in April to 10½ years in jail for taking bribes in 2005-2014, according to state broadcaster CCTV. He was put under investigation in November 2015 and resigned from his post in January 2016. 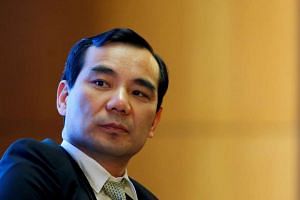 The general manager of Shanghai-based hedge fund Zexi Investment, who earned nicknames including "Hedge Fund Brother No. 1", was sentenced in January to 5½ years imprisonment for market manipulation. He was detained by police in November 2015.

The head of China's largest securities firm, CITIC Securities, was arrested in April 2016 with other company executives suspected of involvement in criminal activity, the official Xinhua news agency reported. In 2015, CITIC Securities said he was under investigation for possible insider trading and leaking information.

The former chairman of Changjiang Securities died in January 2016 after falling from an apartment building. Xinhua said police in Wuhan, capital of Hubei province, where the brokerage was based, found a suicide note left by Yang. His company had said he was being investigated by China's anti-corruption watchdog for discipline violations.

Fosun International said in December 2015 that Guo was "assisting in certain investigations carried out by mainland judiciary authorities", after media reported the company lost contact with its founder and chairman.

However, Guo travelled to the United States later that month, two executives told Reuters then, easing investor concerns that Chinese authorities had restricted the billionaire's movements. He remains at the helm of Fosun.

After reporting him missing in November 2015, Guotai Junan Securities said in December that Yim, its chairman and CEO, resumed his duties after helping the authorities with an unspecified investigation.

The nature of the investigation was unknown, but Yim's absence coincided with an anti-graft campaign in the financial sector following a market slump.

The former head of China's top energy group, China National Petroleum Corp (CNPC), was sentenced to 16 years for bribery and abuse of power in October 2015. A court said he took more than 14 million yuan (S$2.84 million) in bribes in 2004-13.

Jiang was CNPC's chairman in 2011-2013 and went on trial in April 2015. He was a close associate of Zhou Yongkang, China's once-powerful domestic security chief and a former member of the elite Politburo Standing Committee - the most senior person to have been charged with corruption in Xi's anti-graft campaign.

The former Hanlong Mining tycoon was executed in February 2015 for murder and running what state media called a "mafia-style" gang. Liu, who had suspected ties to the family of former security chief Zhou, was put under investigation in 2014.

China's Anbang says chairman has stepped aside, after report of his arrest