KUALA LUMPUR (THE STAR/ASIA NEWS NETWORK) - Tourist arrivals from mainland China to Malaysia dropped by an estimated 30 per cent to 35 per cent during their week-long National Day break last week compared to same period last year.

Industry players said this was the first time Malaysia posted a fall in tourist arrivals from China during the "golden week" peak season.

"Inbound tourism from China was very weak this time... local tour guides went overseas for holidays during this golden week.

"I estimated a fall of over 30 per cent in Chinese arrivals last week," said Datuk Keith Li, who owns the travel agency GTC Group in Kuala Lumpur jointly with the Chinese government.

Li is also president of the China Entrepreneurs Association in Malaysia.

Although Chinese tourists love Malaysia's beaches, culture and food, Li said he was "not optimistic" that Malaysia could get three million arrivals from China this year.

His views were shared by Mint Leong, deputy president of the Malaysian Inbound Tourism Association. 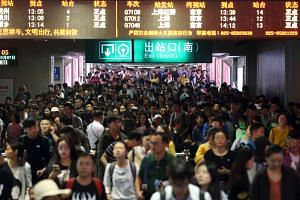 Bukit Bintang: Tourist hub for those from China, Middle East

A walk on the wild side of KL

"I estimated that there was a fall of 30 per cent to 35 per cent in Chinese tourists last week.

"This is quite a serious drop, given that there was an increase of outbound tourists from China," said Leong.

Malaysia, which is ranked the sixth most popular global tourist destination for the Chinese last year, could drop to the ninth or 10th spot this time, Leong said.

Former Malaysian prime minister Najib Razak said the drop in Chinese tourist arrivals is a result of political attacks focusing on relations and investments with China.

The former premier said such political ploy and criticism continued beyond the May general election and it will impact the country's economy negatively.

"Today, the media reported that the number of tourists from China has dropped some 35 per cent recently, which is the first time it has ever occurred. "Previously, such tourists increased every year as China is one of the biggest tourist source for Malaysia," he said in Facebook post on Tuesday (Oct 9).

"Not just durian and tourists, in fact even the price and total export of palm oil has dropped drastically after GE14...Good diplomatic relations is of utmost importance," he said.

The Pekan MP said the country's tourism sector is among the biggest sectors in Malaysia, contributing 13.7 per cent of the economy in 2016.

"I hope the drop in tourists from China will be rectified as soon as possible as millions of rakyat are depending on this sector as their source of income," he said.

According to a report on Nanyang online, Raub's musang king durian failed to earn Chinese money during the golden week due to the drop in Chinese tourists.

"I don't think we can achieve the three million target this year.

"If we don't do anything now, we may see a fall of 10 per cent in Chinese arrivals compared to last year," added Leong, who heads Sunflower Holidays Sdn Bhd.

"Apart from the comments by politicians, there is a lack of big guns promoting Malaysian tourism in China. On China's side, we don't see leaders telling their nationals to come to Malaysia.

"Premier Li Keqiang described how he fell in love with durian in 2015 during his visit here," said Leong.

He said due to improved ties between Japan and China recently, Tokyo had become the top tourist spot for Chinese.