In the run up to the vote, critics on Chinese social media attacked the move and drew parallels to North Korea or suggested a Mao Zedong-type cult of personality was forming. The party only announced the proposals last month.

In an editorial, widely-read tabloid the Global Times said Western political theories were of no use to China.

"We are increasingly confident that the key to China's path lies in upholding strong Party leadership and firmly following the leadership of the Party Central Committee with Comrade Xi Jinping at the core," it said.

"In these years we have seen the rise and decline of countries and particularly the harsh reality that the Western political system doesn't apply to developing countries and produces dreadful results." The official China Daily reiterated a point previously made by the party's People's Daily that the amendment did not "imply lifetime tenure for any leader".

"Yet some people in the West insist otherwise, even though it is only through specious speculation that they claim to know better," the English-language paper said.

Such people - it did not name names - have a deep-rooted ideological bias against China and have made one failed prediction after another about China, it added. 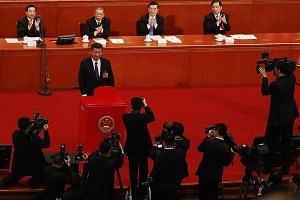 It's official: China's Xi can remain president for life

"Their erroneous judgments are only a litany of short-sighted calumnies against the party and the nation." While social media accounts of major state media outlets either disabled their comments section or only made visible comments praising the party, some words of dissent did manage to make it past the censors.

"How is it that socialism which is praised has become a monarchy making law?" wrote one user on the Twitter-like Weibo micro-blogging site.

"Why have they not released the voting tally?" wrote another.

Only two "no" votes were cast, with three abstentions, from almost 3,000 delegates in parliament.

The US-based group Human Rights in China said there were huge risks in allowing such a concentration of power.

"Ending the two-term limit ignores the painful lesson of the Mao era and exposes the Chinese people again to the massive human suffering, abuses and national catastrophe that could result from unaccountable power concentrated in the hands of one person," Sharon Hom, the group's executive director, said in a statement.