SHANGHAI (CHINA DAILY/ASIA NEWS NETWORK, REUTERS) - China's State Drug Administration has launched an investigation of Changchun Chang­sheng Bio-tech, which was found to have fabricated production records for freeze-dried rabies vaccines for human use.

The cases of those suspected of violating laws will be transferred to public security departments, the authority said on Sunday (July 22).

Premier Li Keqiang said in an instruction that the vaccine case has crossed a moral line, and the nation deserves a clear explanation, the State Council said on its website on Sunday.

"We will resolutely crack down on illegal and criminal acts that endanger the safety of peoples' lives, resolutely punish lawbreakers according to the law, and resolutely and severely criticise dereliction of duty in supervision," he was quoted as saying.

The State Council should immediately send a group to investigate to uncover the truth as soon as possible, and any wrongdoing will be severely punished regardless of who is involved, Mr Li said.

The scandal erupted a week ago, after major vaccine maker Changsheng Bio-tech, the parent company of Changchun Changsheng Bio-tech, was found to have violated standards in making rabies vaccine for humans. There did not appear to be reports, however, of people harmed by the vaccine or having contracted rabies after receiving it. 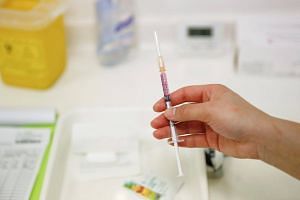 Mr Xu Jinghe, deputy head of the drug administration, said the company was found to have fabricated production and inspection records.

Such activities are in violation of the country’s drug management law and related regulations on drug production, Mr Xu said.

In a notification on July 15, the drug administration ordered the company to stop producing the human rabies vaccine. It said no products involved in the inspection were currently being sold and all the vaccine involved had been removed.

The administration has also revoked the company’s certificate that is needed for production and sales of the vaccine.

Its remarks came amid public concerns about vaccine safety in China over the weekend, after it was also revealed that Changsheng Bio-tech was linked to a substandard adsorbed diphtheria-pertussis-tetanus, or ADPT, vaccine for infants.

The company was fined 2.58 million yuan (S$523,120), and 859,000 yuan in assets from sales of the vaccine were confiscated. The case was under investigation last year.

Changsheng Bio-tech revealed in November that 252,600 doses of the substandard ADPT vaccine that could not meet the standard of immunity results were all sold to Shandong province and had been recalled.

“The substandard ADPT vaccine won’t post safety threats to people’s health, but will reduce the expected immune effects,” Dingxiang­yuan, a professional medical website, said in an online reply to public concerns about the vaccine’s safety.

The state drug administration confirmed on Sunday that it was discovered in October that one batch of Changsheng’s ADPT vaccine was substandard, and its production of ADPT has been suspended since then.

A plan for reinoculation of those affected was worked out in February.

The latest case has sparked anger on social media and dealt a blow to China's drug regulator, which has been struggling to clean up the world's second-biggest drug industry and promote domestically made vaccines.

Several state media called for severe punishment and stricter supervision of vac­cines. People’s Daily released a commentary on Sunday saying that drugmakers should stick to moral principles and make life their priority rather than profits.

In a news report released on Sunday, the Procuratorate Daily, a publication of the Supreme People’s Procuratorate, called for stronger supervision of vaccine production and tougher penalties for violators.

An editorial on Monday in the China Daily warned that the case could become a public health crisis if it is not handled "in a reasonable and transparent manner".

"The government needs to act as soon as possible to let the public know it is resolved to address the issue and will punish any wrongdoers without mercy," it said.

"Those who dare to challenge the bottom line and make substandard or even fake vaccines need to receive the heaviest penalties according to the law."

Late on Sunday, the state news agency Xinhua ran an editorial calling for strict punishment for any violations, big or small, in the vaccine industry and for regulators to close loopholes and tighten oversight of the industry.

The China Securities News also weighed in, saying that listed companies, such as Changsheng Bio-tech, have a duty to the public and to conduct business with integrity.

"Cases like Changsheng Bio-tech, where laws and regulations are ignored and internal controls exist only in name bring a painful price," it said.

The Shenzhen Stock Exchange announced that it sent letters to Changsheng Bio-tech on Sunday, calling for early disclosure of the two cases to the public.

“We will maintain strict supervision over the listed company’s information disclosure responsibility according to the law and guarantee legal rights of investors,” it said in the online announcement.

The Shenzhen Stock Exchange posted a reply from Changsheng Bio-tech later in the afternoon on its website. It said: “We feel very remorseful and guilty about what has happened, and we apologise to all those vaccinated and investors.”

The company added that it had learnt a lesson.