BEIJING (AFP) - A Chinese model who featured in a Dolce & Gabbana promotional video attacked for being culturally insensitive has apologised for her role in the production, more than two months after the firestorm erupted.

The controversy arose last November after the Italian fashion firm posted short clips on Instagram showing a woman eating pizza and spaghetti with chopsticks, which critics said was offensive to Chinese culture.

It escalated after screenshots emerged of an Instagram user's chat with the famously mercurial co-founder Stefano Gabbana, who used smiling poop emojis to describe China and launched insults at the country and its people.

"For not properly interpreting the proper way of holding chopsticks, I express my deepest regret," model Zuo Ye wrote in a lengthy post put up on Monday (Jan 21) on the Weibo social media platform.

"I appreciate the fact that this isn't just my personal action, but that I am representing the image of our country, and of Chinese culture so I am racked with guilt, deeply apologetic, and will definitely improve my decorum in future," she wrote.

Identifying herself as a full-time model, Zuo said she was attacked after the video surfaced, and received online threats, which also extended to her agent, family and friends.

Providing a chronological account of the Milan shoot in November, Zuo said she had no idea the video would be edited the way it was, and was just trying her best to be cooperative. 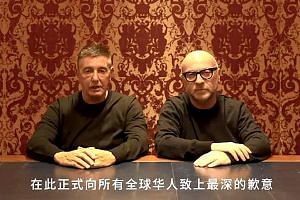 We beg your pardon, say Dolce & Gabbana founders to Chinese

"I will learn well from this incident, and in future present Chinese culture in a better manner," she wrote.

Dolce & Gabbana was forced to cancel a Shanghai fashion show as a result of the incident, with the brand issuing an apology statement and claiming that Gabbana's account had been hacked.

It did little to calm the situation and the Italian fashion house's products disappeared from multiple Chinese e-commerce platforms.

The brand's founders eventually apologised to customers in a specially shot video.

But Dolce & Gabbana products are still unsearchable on e-commerce site Taobao while searches on JD.com turn up no results.