The firm, whose yellow-hued bicycles litter city streets around China, has been hit by a costly battle with main rival Mobike, owned by Meituan Dianping, that has eroded its ability to make payments to suppliers.

In the past week, millions of users, uncertain about Ofo’s future, have also applied for a return of the deposits they had paid to use the platform, adding to the firm’s financial woes.

“It has meant turning every renminbi into three,” the CEO said.

Dai added that he had thought “countless times” about ways to resolve the issues,“even of dissolving the company and applying for bankruptcy”.

Ofo and Alibaba were not available for comment on Thursday.

Dai, also Ofo’s founder, added he was determined to keep the company afloat. “As pressures mount we must endure, as difficulties grow we must find ways to overcome them,” he said in the letter. 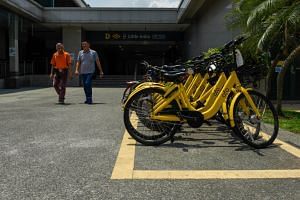 China bike-sharing giant Ofo to shut most US operations after less than a year: Report

Ofo, which started in university campuses in Beijing and expanded to countries around the world, has become something of a cautionary tale about the rapid debt-fuelled boom and burst of new technology enterprises in the country.

China’s bike-sharing industry has seen firms burn through hundreds of millions of dollars in the fight to dominate key cities, with several going under or taken over.

In August, Reuters reported that Didi and Alibaba’s Ant Financial were in talks with Ofo for a joint buyout, potentially valuing the start-up at up to US$2 billion (S$2.7 billion).

As word of Ofo's woes spread, nearly 2,000 people gathered outside Ofo's headquarters in Beijing on Tuesday morning, anxious to know whether - and when - their deposits for the shared bikes would be returned.

A media report on Monday that Ofo's offices in Jinan, Shandong province, and Xi'an, Shaanxi province, were vacated last month had aroused fears that the company was on shaky footing.

The company claimed 200 million users in China as of November last year, meaning deposits could amount to as much as 20 billion yuan (S$4 billion).

Ms Zhang Na, a 50-year-old Beijing native, said she had sought a refund of her deposit for about two months but failed. After waiting in line for nearly two hours on Tuesday morning, Ms Zhang again failed to get her deposit back, as the company said her account had a deficit.

"I can't get a word with the company staff," she said, adding that the scene at Ofo was out of control, and a heated dispute even broke out between workers and customers.

By 5pm on Tuesday, the refund system of the Ofo app showed that more than 9.7 million users were waiting for refunds, with requests totalling at least 920 million yuan.

Dr Zhu Wei, an associate law professor at China University of Political Science and Law, said deposits for shared bikes should be supervised through the entire process.

"Currently there's not enough regulation," Dr Zhu said, adding that it is necessary to set up an industry association to supervise the use of deposits.

In August last year, a guidance from the Ministry of Transport suggested that the use of bike deposits should be narrowly restricted.

The use of deposits should also be supervised by related transport and finance departments, the guidance said.