BEIJING (BLOOMBERG) - ZTE Corp. pledged to overhaul its flawed management and internal culture after striking a deal with the US to get back in business after a damaging two-month hiatus.

In a memo to employees seen by Bloomberg News, ZTE chairman Yin Yimin promised to hold "relevant people" accountable for a ban on purchases of American technology that threatened to smother China's second-largest telecoms gear-maker.

Yin, who took up his post in March 2017, said ZTE will restore operations swiftly once the issue is finally resolved.

ZTE's candour mirrored withering criticism from state-run media since the imposition of the ban in April for violating Iranian sanctions and then lying about it. It's since become a focal point of a trade dispute between China and the US. In an online commentary, China National Radio warned Chinese firms shouldn't be like "giant babies" and rely on Beijing to bail them out when they run afoul of international laws.

The memo came hours after Commerce Secretary Wilbur Ross said ZTE will pay a record fine and replace its entire board of directors and senior leadership in exchange for lifting the ban.

The moratorium is suspended for 10 years but can be activated should the company commit additional violations. Mobi Development Co, which relies on ZTE for more than 45 per cent of its business, rose as much as 10.1 per cent. ZTE's own shares remain suspended. 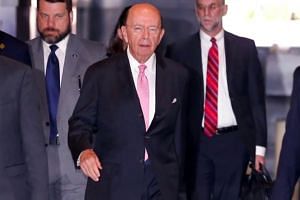 US strikes deal to end tough sanctions on China's ZTE

ZTE relies on US suppliers such as Qualcomm Inc to make its networking gear and smartphones. The Shenzhen, Guangdong-based company could incur losses of at least US$3 billion as a result of the US action, Bloomberg News has reported.

But it has a plan in place to swing idled factories into action within hours once given the go-ahead.

The company could be back in business by late next week, said Edison Lee and Timothy Chau, analysts for Jefferies in Hong Kong. It should have few problems swallowing the financial fines given its roughly 30 billion yuan (US$4.7 billion) of cash on hand, they added.

"We expect it to promote younger members of the company to be the top management team," they wrote in a note. "We will not be surprised that the central government may put in its representatives as board members, since it has been instrumental in helping ZTE reach the new settlement agreement."