SHANGHAI (BLOOMBERG, AFP) - Chinese President Xi Jinping on Monday (Nov 5) hit back against protectionist trade practices advocated by US President Donald Trump in a speech in which he also pledged to further cut import tariffs and open his country’s markets.

“We will foster a world-class business environment,” Xi said in an address opening the import fair in Shanghai.

In a veiled reference to the tariffs Trump has levelled against his country’s exports, Xi told the inaugural China International Import Expo (CIIE) on Monday that “the practices of beggar-thy-neighbour” would lead to global stagnation.

“As globalisation deepens, the practices of law of jungle and winner take all are a dead end,” Xi told the gathering in Shanghai, which featured more than 3,600 companies from 172 countries, regions and organisations.

“Inclusion and reciprocity, win-win and mutual benefits are a widening road.”

Xi’s speech had been closely watched for new measures that would show China was serious about opening its economy quickly as investors look for signs of a possible resolution to a trade war between the world’s two biggest economies.

But he said little that would indicate a breakthrough is coming any time soon, contributing to a slump in the yuan as Asian stocks retreated.

Decrying “protectionism”, “isolationism” and confrontation, the Chinese leader said countries should fix their own houses before targeting others.

“They should not just point fingers at others to gloss over their own problems,” Xi said.

“They should not hold a flashlight in hand, doing nothing but highlight the weaknesses of others and not their own.” 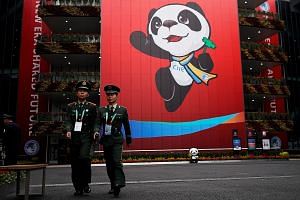 Beijing has framed the first annual China International Import Expo as a sign of its commitment to open markets despite mounting criticism to the contrary and the worsening trade war with Washington, which has seen both sides impose punitive tariffs on billions of dollars of goods.

“He repeated a lot of the planned policies we have already heard in the past few months,” said Sue Trinh, head of Asia FX Strategy at RBC Capital Markets in Hong Kong.

“Markets seemed to like the headline ‘to cut import tariffs,’ but this plan was already announced in September and can only be milked so many times.”

While Xi pledged to import US$30 trillion of good over the next 15 years – up from US$24 trillion in previous estimates – his policy initiatives were largely in line with previous statements.

The government has already cut tariffs this year and said it would do so again.

He did say, however, that stimulus already announced was being seen in the economy.

He also said China would further develop Hainan as a free-trade port, prompting shares of companies based in the southern province to jump. Enthusiasm wasn’t high in the run-up to the event.

Washington has snubbed the gathering by not sending high-level representation, instead calling on China to change “unfair” trade practices. B

But the lure of China remains strong and the US contingent includes even tech giants such as Facebook, which is blocked in China, and Google, which pulled out years ago over censorship and cyber-attacks.

Both are seen as eyeing new ways into China’s giant market. Microsoft founder Bill Gates will join a business forum, but the touchy optics of attending a China import expo amid trade tensions means few big-name American CEOs are confirmed.

China is under pressure from Trump and elsewhere to wind back its US$423 billion goods trade surplus with the world, and Xi has already pledged that the country will import US$24 trillion dollars of goods from abroad over the next decade and a half.

While Trump has floated the possibility of a deal when he meets Xi in the coming weeks, they remain far apart on market access and government support for state-run enterprises.

While Xi didn’t mention Trump or the US by name, the trade conflict was a clear theme in his remarks.

“All countries should strive to improve their business environment and solve their own problems,” Xi said.

“They shouldn’t always whitewash themselves and blame others, or act like a flashlight that only exposes others but not themselves.”

Trump, who has in recent days expressed optimism about cutting a deal with China, touted his approach toward the country during a campaign rally in Tennessee shortly before Xi’s speech.

China ranks 59th out of the 62 countries evaluated by the Organisation for Economic Cooperation and Development in terms of openness to foreign direct investment.

Almost half of companies surveyed in June by the European Chamber of Commerce in China said they missed out on business opportunities due to regulatory barriers or market access restrictions, and they expected obstacles to increase during the next five years.

Yet the US government mostly stayed away, even though China said Trump voiced support for the expo in a call with Xi last week.

A US Embassy spokesman said the Trump administration had no plans to send a high-level representative, adding that “China needs to make the necessary reforms to end its unfair trade practices that are harming the world economy.”

“It seems like there were good statements and good headlines, but what we want are concrete actions and a concrete timetable of reform,” said Carlo Diego D’Andrea, the Shanghai chairman for the European chamber.

“We can’t let the CEOs of European companies in China to set up their businesses on a foundation of hope that reform will come.”