BEIJING (BLOOMBERG) - China's Vice-President said cooperation is the best choice for Beijing and Washington while reiterating his nation would stay committed to its own path, a day after mid-level trade talks ended on a positive note.

"As Chinese-US relations stand at a new starting line, it must stay committed to our original aspiration and focus on coordination, cooperation and stability," Wang Qishan said at a reception in Beijing on Thursday (Jan 10) to commemorate the 40th anniversary of China and the US establishing diplomatic ties.

"We must adapt to the new reality, keep looking for and expanding our common interests, deepening and promoting practical cooperation."

China and the US are trying to resolve an unprecedented trade stand-off, with mid-level talks this week in Beijing ending on an optimistic note - though few details have emerged.

Global stocks have rallied on fresh hope of a breakthrough in the negotiations. The next steps include a possible meeting between Wang and US President Donald Trump at the World Economic Forum later this month.

Wang - a long-time ally of President Xi Jinping - is leading China's team to the annual forum in Davos, Switzerland, and will deliver a keynote address there. The talk with Trump would take place on the sidelines of the meeting, the South China Morning Post reported.

Thursday's event was attended by members of the US diplomatic and business community in China, including US Ambassador Terry Branstad and head of the American Chamber of Commerce Tim Stratford. 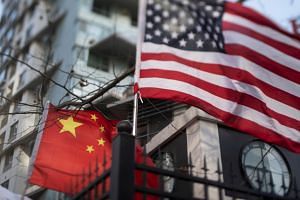 China, US want to work together on trade: Foreign ministry

Trade deal between US and China possible, but expect hostilities to continue

In November, Wang did little to assuage fears that China and the US are headed for a confrontation that could disrupt the global order. Beijing remained ready to discuss solutions to the trade conflict, he told Bloomberg's New Economy Forum in November.

But he warned that China wouldn't again be "bullied and oppressed by imperialist powers".

"Regardless of how the international landscape changes, China will unswervingly follow its own path, run its own affairs steadfastly and enable its people to have a better life," Wang said on Thursday.

China has made a number of concessions since Xi and Trump agreed to a 90-day truce in Argentina on Dec 1, including slashing import tariffs on more than 700 products. Still, negotiations have been stuck over US demands for deep structural reforms including stopping forced technology transfers, enforcing intellectual property rights and ending state subsidies for strategic industries.

The Trump administration is pushing for a way to make sure China delivers on its commitments in any trade deal. China said this week's meetings were "extensive, in-depth and detailed", and laid the foundation for a resolution of the conflict.