The Chinese pharmaceuticals industry suffered another blow on Monday (July 23) after reports emerged that hundreds of thousands of children may have been injected with faulty vaccines from major drug producer Changchun Changsheng Biotechnology.

Here are five other health scandals that caused outcry in China.

In 2008, almost 300,000 children fell sick and at least six died after consuming formula milk tainted with melamine, a chemical additive used in the production of plastics.

Middlemen who bought the milk from farmers watered it down and laced it with melamine to make it appear to have higher levels of protein in tests. They then resold it for a profit.

At least two men responsible were sentenced to death, and at least one other associate was given a life sentence.

However, the scandal did not end there. Some of the tainted milk, which should have been destroyed, was found on the market again later on.

The use of heparin, a blood-thinning drug, was linked to at least 81 deaths in the United States in 2008. US investigators traced the contamination to batches of heparin imported from China.

The drug is administered intravenously and is used to prevent blood clots during some types of surgery.

The China-produced drug was found to be contaminated with oversulfated chondroitin sulfate and was exported to at least 10 countries.

Patients reported sharp falls in blood pressure, nausea and shortness of breath within just half an hour of having the drug administered to them.

The heparin, which was derived from pig intestines, was made by small unregulated companies in China.

China Daily reported in 2011 that some cooking oil being sold in shops in Beijing, Tianjin and Hebei had been produced from recycled waste oil known as "gutter oil".

The waste oil came from restaurants and street vendors, and had already been used several times for frying food.

Some of it was salvaged from bins, grease traps and sewage drains. Other sources of waste oil included decomposing animal parts and animal fat refuse.

The gutter oil was sold not only to consumers, but also back to eateries looking to cut costs. It was also allegedly used in food production and antibiotics manufacturing.

The authorities immediately announced measures to curb the use of gutter oil, but admitted there were no guaranteed methods of detecting illegal oil.

As recently as April 2017, restaurant owners and staff were arrested after they were caught using gutter oil in hot-pot cooking.

Consumer confidence in domestic formula milk had been shaken following the 2008 melamine incident, leading many Chinese consumers to strongly prefer foreign milk brands for years after.

Other manufacturers tried to repackage and sell expired milk powder produced by Fonterra in New Zealand to reduce their losses.

One of the brands being imitated was Similac, which is sold by US producer Abbott Laboratories.

At least nine people were arrested and some 1,400 milk powder products were recalled.

Chinese search engine Baidu was the subject of investigation in 2016 after a 21-year-old student died of cancer. 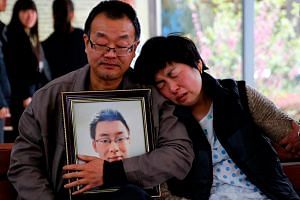 Mr Wei Zeixi, who had a rare form of cancer known as synovial sarcoma, wrote a blog post before his death detailing how he had sought treatment.

A promoted search result on Baidu had led him to The Second Hospital of Beijing Armed Police Corps in Beijing, which claimed to offer treatment for his condition. His family raised more than 200,000 yuan (S$40,000) to pay for immunotherapy.

The therapy was ineffective and Mr Wei accused Baidu of promoting misleading medical information in its search results. Synovial sarcoma is usually treated with chemotherapy and surgery.

Netizens denounced the search engine after Mr Wei died, with some writing Baidu with characters meaning "100 poisons" instead "100 times". The hospital involved temporarily shut its doors to new patients in the wake of the scandal.