BEIJING - China's top political advisory body expressed support for the leadership of the Chinese Communist Party (CCP) at the opening of its annual meeting in Beijing on Saturday (March 3).

This comes as the National People's Congress, or parliament, is set to approve constitutional changes, which include adding a line that says the leadership of the CCP is the "defining feature of socialism with Chinese characteristics", when it convenes on Monday.

"(The) greatest strength of the system... is the leadership of the CCP. The Party exercises overall leadership over all areas of endeavour in every part of the country," said Mr Yu Zhengsheng, head of the Chinese People's Political Consultative Conference (CPPCC).

Saturday's opening marked the start of a new five-year term for the more than 2,000 CPPCC delegates, more than half of whom are new.

Mr Yu, formerly China's fourth-ranked leader, urged delegates to remain committed to the CPPCC's nature, which is that it "plays its role by exerting political influence, not by imposing constraints on political power".

"It is not an organ of power, nor a decision-making organ. It is an important platform for all Chinese political parties, social organisations, and people from all ethnic groups and all sectors of society to work together and participate in the deliberation of state affairs in a democratic manner," Mr Yu told delegates gathered in the Great Hall of the People.

In his work report, Mr Yu stressed the need to focus on economic development to meet the people's ever-growing needs for better lives. 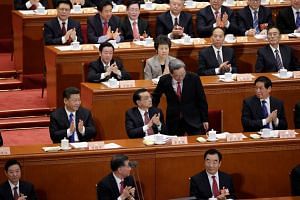 Looking ahead, he said the CPPCC's main job for the year is to offer suggestions on alleviating poverty in extremely poor areas, addressing pollution, preventing financial risks, developing the real economy and improving the quality of China's supply system.

"We will contribute our well-thought advice and real efforts towards realising the first centenary goal, moving closer to the second centenary goal, and addressing imbalances and inadequacies in development," he said, referring to China's goals of doubling 2010 per capita income by 2021 and becoming a strong, modern socialist country by 2049.

He also made a call to "deepen solidarity and friendship" with "compatriots in Hong Kong, Macau, and Taiwan as well as overseas Chinese".

The advisory body will "mobilise all the sons and daughters of the Chinese nation to work together for the greater national interests and realisation of the Chinese Dream", he added.

The Chinese Dream is a vision set by President Xi Jinping to restore the nation to its former glory as a global power.

CPPCC delegates told reporters on the sidelines of the meeting that they support the constitutional changes proposed by the CCP central committee, including a controversial one to abolish the two five-year term limits of the President and Vice-President.

"This is a major move the country and the (ruling) party must make in face of challenges both at home and abroad," said Guangxi University of Finance and Economics president Xia Fei

"I believe that this is fully backed by public opinion. The other CPPCC delegates and the members of the public that we spoke to are all in favour (of the changes)," he added.

CPPCC delegates will discuss these constitutional changes, and socio-economic issues centred on improving the people's livelihood in a series of meetings that will end on March 16.