BEIJING (BLOOMBERG) - Mr Wang Yi may be China's top diplomat, but on Monday (July 30), he sounded more like the country's chief lecturer of economics.

The Chinese Foreign Minister took advantage of a visit by his UK counterpart to give the US a mocking economics lesson, saying American policies were to blame for the country's trade deficit and the collapse of talks.

Mr Wang began in response to a reporter's trade question, saying, "Let me share with you some basic facts and I believe you will make an objective and sensible assessment."

"The US often says that it is taken advantage of, but this is perplexing. It's like someone who buys a US$100 (S$136.23) product in a supermarket, has the product in hand, and then complains that he is US$100 short," Mr Wang said. "Does that logic stand up?"

Mr Wang's defiant remarks underscored deep divisions between the two sides with just a month before the public comment ends on Mr Donald Trump's proposal to levy tariffs on US$200 billion of Chinese goods.

While American and Chinese officials have hinted at the possibility of restarting talks, it's been almost two months they last held high-level negotiations.

"China and the US have had several rounds of consultations and reached important consensus, but regrettably the US did not fulfill its obligations," Mr Wang said. "Nor did it make concerted efforts with China." 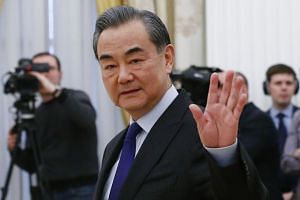 Mr Wang was adopting a common argument against Mr Trump's trade policies, in particular his focus on US trade deficits.

"In fact, the US has gained a lot from its trade deficit with China," Mr Wang said. "It gains massive, inexpensive resources and goods, which increase the welfare of consumers and increase the strength of the dollar."

While the UK is seeking alternative sources of trade after leaving the European Union next year, China is courting international support in its trade dispute with the US.

Mr Wang said that he and Mr Hunt had agreed to work together to uphold free trade, multilateral agreements and World Trade Organisation rules.

Still, he said that China was willing to resume talks with the US if the conditions were right.

"China's door of dialogue and negotiation remains open, but any dialogue must be based on equality and mutual respect," Mr Wang said. "Any threats or pressure by one side will only be counterproductive."