BEIJING (AFP) - A dozen students from a top Chinese university staged a protest on Friday (Dec 28) after the school removed the president of an on-campus Marxist group amid an ongoing crackdown on student activists this year.

The students gathered in an open area in front of the science department where they held up signs and shouted slogans protesting against the change in the society's leadership.

But security moved in almost immediately and started pulling students away, forcing some to the ground while others were pushed towards a waiting black car.

Peking University did not immediately respond to AFP's request for comment.

The university said on Thursday that it "restructured" the student-run Marxist group, replacing core members and student leaders, including former president Qiu Zhanxuan, with their own picks.

The move came one day after Qiu was detained by police for "disturb(ing) the public order" on campus by singing and holding slogans.

An eyewitness told AFP that Qiu was arrested for attempting to commemorate the 125th birth anniversary of Mao Zedong, whose legacy in China remains controversial.

Although Chinese President Xi Jinping has called for a refocusing on communist roots - including a May speech which called for Marxism to be promoted in campuses and classrooms - Beijing is increasingly wary of student-run Marxist societies, especially those that try to apply theory to practice. 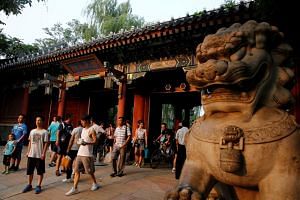 Over the summer, when university students joined efforts to organise a labour union for factory workers in southern Guangdong province, Chinese authorities flew into action.

In August, a police raid swept up the student activists, beating several of them and confiscating their phones, according to the Jasic Workers Solidarity group, a labour rights organisation that the students joined.

Several of them, including Yue Xin, a Peking University graduate who became known after co-authoring a petition demanding details of a sexual abuse case at the school, have not been heard from since.