BEIJING (BLOOMBERG) - A year of plenty for China's coal industry will probably mean a slump in imports, with miners in Australia likely to be the hardest hit.

The world's biggest producer and consumer of the fuel is set to lift output by more than 100 million tonnes in 2019, Mr Wang Hongqiao, vice-president of the China National Coal Association, said at a conference in Shanghai on Tuesday (April 9).

The nation dug up 3.55 billion tonnes of coal in 2018. Another increase would be the third year in a row and could see output close in on 2015's record of 3.68 billion tonnes. At the same time, Mr Wang predicted that consumption would remain stable.

The implication is that imports will have to give way. Inbound shipments of thermal coal, the type used by power stations, will shrink this year by as much 12 million tonnes, or about 5 per cent, Noble Group's head of hard commodities research Rodrigo Echeverri told the conference.

He said the decline will mostly affect coal of mid-calorific value from Australia, which has already seen shipments beset by port delays in the early months of the year.

China's management of its mammoth industry often includes adjusting import policies to boost demand for local coal or to keep prices in check. Still, the go-slow on Australian shipments in particular has stoked speculation that Beijing is using trade to make a political point.

The authorities have adopted stricter testing, including checks for radioactive content, Mr Chen Bin, deputy chief engineer of China Datang Corp's fuel unit, said on the sidelines of the conference. 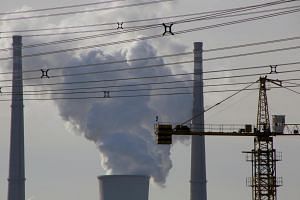 The quantity of Australian imports will depend on price, the coal association's Mr Wang said on the sidelines of the event, although he acknowledged that the "international political environment can also play a role", without elaborating.

Noble's Mr Echeverri said the broadest impact of China's glut will be the first decline in global seaborne trade of thermal coal since 2015.

The surplus comes as China upgrades its coal industry, swapping out old and expensive mines for bigger and more efficient operations, even as it tries to reduce its reliance on the fuel in order to cut pollution and meet climate change targets. Bloomberg Intelligence estimates that at least 200 million tonnes of coal capacity will be ready to start production in 2019, with another 409 million tonnes of government-approved capacity under construction.

China is also boosting the capability of its transportation links to move the expanding volumes of coal. Railway capacity will increase by 650 million tonnes, or 30 per cent, to 2.82 billion by 2020, said Mr Li Hua, a director at China Railway Economic and Planning Research Institute. The Daqin network, which connects the major producing region of Shanxi to Qinhuangdao port, will expand by 450 million tonnes by 2020.