BEIJING - China has announced key personnel changes in the southern economic powerhouse of Guangdong and the financial hub of Shanghai over the weekend.

With the promotion of the two Lis, analysts say President Xi Jinping now has allies calling the shots in all four of China's municipalities - Beijing, Shanghai, Tianjin and Chongqing.

Mr Li Qiang, one of four Politburo members who are in their 50s, is said to be in the running to succeed Mr Xi. The other three are Chongqing party chief Chen Min'er, 57;  Ding Xuexiang, 55, and former Guangdong party chief Hu Chunhua, 54. Mr Ding  served as a secretary to Mr Xi when the latter was party boss in Shanghai in 2007.

A native of the eastern coastal province of Zhejiang, Mr Li Qiang was secretary to Mr Xi for three years when the latter was Zhejiang party boss from 2002 to 2007.

Now that Mr Li Qiang has been named as the party boss of Shanghai, just days after securing a seat in China's powerful 25-member Politburo - which is one rank below the PSC - it is apparent that he is being groomed for higher office.

Almost all Shanghai party bosses since the early 1990s have gone on to become PSC members. Current Shanghai party chief Han Zheng, 63, was promoted to the PSC last week and is tipped to be the first vice-premier in the State Council, or Cabinet.

Mr Li Qiang hails from what China watchers calls the New Zhijiang Army, one of Mr Xi's key power bases. It is made up of people who have worked closely with Mr Xi during his stint as Zhejiang party boss.

Zhejiang and its capital, Hangzhou, are home to some of China's most innovative private sector companies. (Alibaba has its headquarters in Hangzhou)

"Xi made it clear that he believed the private sector represented the future of China," one former western official who knew the president when he was Zhejiang party secretary was quoted as saying by Financial Times. 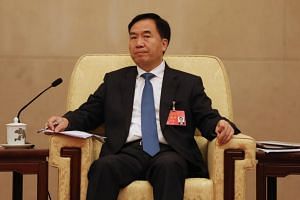 Born in Wenzhou - a city known for entrepreneurship and a vibrant private economy - in 1959, Mr Li Qiang received an undergraduate education in agricultural mechanisation at the Zhejiang Institute of Agriculture. His first job was at an electromechanical irrigation and drainage station in Rui'an in Wenzhou city.

He was appointed party boss of Wenzhou in 2002 at the age of 43, making him the youngest person to take up that position in more than three decades, according to South China Morning Post.

What set him apart from some of his predecessors was his support for the city's private sector, according to Mr Zhou Dewen, who was frequently in contact with Li Qiang in his role as the head of a business association representing small and medium-sized enterprises.

"He was not afraid to take risks and responsibility like some others. Back then, private enterprises in Wenzhou were not very keen on going public. But Li encouraged them to list - he managed to change the minds of many company owners," Mr Zhou told SCMP.

After two years (2002 to 2004) as Wenzhou's party boss, he became secretary-general of the Zhejiang's provincial party committee until 2012, a post which makes him the chief of staff to the party boss of the province.

Prior to becoming Jiangsu's party boss, he was governor of Zhejiang from 2013 to 2016.

"His ideas and way of thinking are very close to those of Xi, and he continued to implement Xi's policies after he became governor," Mr Zhou was quoted as saying by SCMP.

Although Mr Li Qiang has been outspoken in his support for economic reform, innovation and the private sector, he has been less vocal when it comes to politics and ideology.

He will be replaced by Mr Lou Qinjian, the party boss of Shaanxi province. Mr Hu Heping is the new Shaanxi party boss, according to Xinhua news agency.