BEIJING (REUTERS, BLOOMBERG, XINHUA) - Tens of thousands of people were being evacuated from flood-hit regions of central China on Thursday (July 22) as officials raised the death toll from heavy rains that have deluged Henan province for almost a week to 33 people.

The provincial weather bureau on Thursday raised the storm alert for four cities in the north of Henan – Xinxiang, Anyang, Hebi and Jiaozuo – to red, the highest tier of a four-step colour-coded weather warning system.

The fatalities included 12 people who were killed when the subway in the provincial capital of Zhengzhou, about 650km southwest of Beijing, was flooded earlier this week.

Eight people are listed as missing across the province.

In Zhengzhou, where the bad weather reached a peak on Tuesday, the skies had cleared but floodwaters were still at waist height, or higher, with entire streets underwater in many areas.

Rescue teams used rubber rafts to ferry residents to safety, while others waded through the waters carrying belongings above their heads, or waited on partially submerged cars to be picked up.

One family transported their young children in a blow-up swimming pool, while another group of people was carried through the floodwaters on an  digger truck.

Some 617.1mm of rain fell in Zhengzhou from Saturday to Tuesday, almost the equivalent of the city’s annual average of 640.8mm, inundating the subway and trapping people at work as others took cover at makeshift shelters at museums, libraries and cinemas.

As the storm moved north on Thursday, more than 73,000 people were being evacuated from the city of Anyang, on Henan’s border with Hebei province. The city had been swamped by more than 600mm of rainfall since Monday, the official Xinhua news agency reported.

Two people were killed in Hebei province when a tornado struck the city of Baoding on Wednesday.

Xinxiang, a small city north of Zhengzhou, recorded 812mm of rainfall between Tuesday and Thursday, shattering local meteorological records, Xinhua reported. Seven medium-sized reservoirs in the city had overflowed, affecting scores of nearby villages and towns.

Tens of thousands evacuated from floods in China

As of late Wednesday, more than 470,000 people and over 55,000 hectares of crops have been affected by the Xinxiang downpours, Xinhua said, adding that the local government had deployed a more than 76,000-strong search and rescue team.

In neighbouring Hebei, two people were killed when a tornado struck the city of Baoding.

“They must take emergency measures such as suspending trains, evacuating passengers, and closing stations in atypical situations such as excessively intense storms,” the Ministry of Transport said in a statement.

The Ministry of Finance on Wednesday earmarked 100 million yuan in disaster relief funds for Henan province.

Meanwhile, China's banking and insurance regulator told lenders to adjust financing policies in the flooded region and refrain from calling back loans to companies that halted their business due to the disaster. The body also encouraged banks to lower loan rates and service charges for affected merchants.

Public scrutiny has also fallen on the timeliness of weather bulletins provided by local meteorological services.

The provincial weather bureau told state media it had issued a report warning of the coming torrential rains two days in advance.

Since Monday evening, meteorological departments from the provincial down to the county level have sent out 120 million text messages to mobile phone users warning them of the storms, the Henan weather bureau said.

Senior meteorologist Chen Tao said the ongoing rainstorms were a result of a number of causes, including the local topography and Typhoon In-fa, which is currently over the Pacific Ocean and has been heading for landfall since Sunday.

Speaking at a Beijing press conference on Wednesday, Mr Chen, chief forecaster of the National Meteorological Centre, said that water vapour has been arriving in Henan from the sea ahead of Typhoon In-fa, which is the sixth this year.

Other factors including high pressure systems and the region’s special terrain have also contributed to the continuous severe rain in Henan, Mr Chen said.

The National Meteorological Centre predicts that Henan will see more rain over the next three days, and it will likely abate on Friday.

Experts have previously warned of an extremely high risk of disasters caused by the continuous rainfall, calling for local governments to enhance prevention and control of floods and geological disasters and strengthen epidemic prevention work in advance. 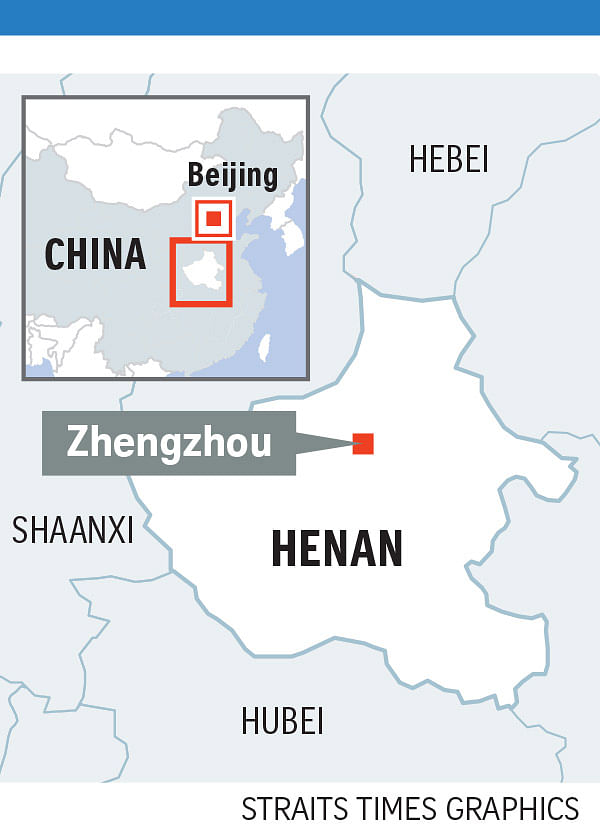