BEIJING (REUTERS) - China commissioned its first domestically built aircraft carrier into service on Tuesday (Dec 17) at a key base on the shores of the disputed South China Sea, in another big step in the country’s ambitious military modernisation.

Little is known about China’s aircraft carrier programme, which is a state secret.

But the government has said the new carrier’s design draws on experiences from the country’s first carrier, the Liaoning, which was bought second-hand from Ukraine in 1998 and refitted in China.

President Xi Jinping is overseeing a sweeping plan to refurbish the armed forces by developing everything from stealth jets to anti-satellite missiles, as China ramps up its presence in the South China Sea and around self-ruled Taiwan.

The carrier, the country’s second, began sea trials last year from its base in Shandong province in the northern port of Dalian, where it was built, and has now been given the official name the Shandong, state media reported, following its commissioning.

Mr Xi oversaw the ceremony at a naval base in Sanya in the southern island province of Hainan, a major facility on the coast of the South China Sea, where China has constructed man-made islands, to alarm around the region and in Washington.

Mr Xi boarded the ship, chatting with its crew and offering his "affirmation" for China’s success at building its own carrier, state media said.

Mr Xi was accompanied by two close political allies, the report added – Vice Premier Liu He who has been leading trade talks with the United States, and Mr Zhang Youxia, one of the two vice chairmen of the Central Military Commission which is in charge of the armed forces and which Mr Xi heads.

Last month the ship, still unnamed at the time, sailed through the sensitive Taiwan Strait on its way to what China called routine exercises in the South China Sea.

Taiwan, claimed by China as its sacred territory and gearing up for elections in early January, denounced the move, saying Beijing was trying to intimidate it.

China has been using the Liaoning mainly for training, as the navy hones its ability to operate fighter jets at sea and with other warships.

Unlike the US Navy’s longer-range nuclear carriers, both of China’s feature Soviet-design ski-jump bows, intended to provide sufficient take-off lift for fighter jets. They lack the powerful catapult launch technology US carriers have.

Most experts agree that developing such a force will be a decades-long task for China, but progress on a home-built carrier boosts prestige for Beijing, seen by many experts as keen to eventually erode US military prominence in the region. 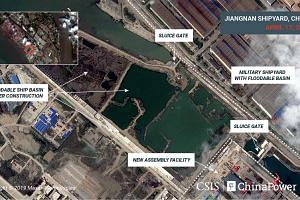 Satellite images show the construction of a new, much bigger carrier is progressing steadily alongside expansive infrastructure work that analysts say suggests the ship will be the first of several large vessels produced at the site.

The images of the Jiangnan shipyard outside Shanghai were taken in September and provided to Reuters by the non-partisan Centre for Strategic and International Studies, building on satellite photos it obtained in April and September last year.

China’s military has not formally announced plans for the third carrier, but official state media have said it is being built.

It is expected to be China’s first carrier with a flat deck and catapult launch system, allowing the use of a wider range of aircraft and more heavily armed fighter jets.

China’s first two carriers are relatively small, accommodating only up to 25 aircraft launched from ramps built on their decks. US carriers routinely deploy with nearly four times that number.