BEIJING (BLOOMBERG, REUTERS) - China’s defence minister warned that any effort to challenge its authority over Taiwan was “extremely dangerous,” following recent US moves that signalled greater support for the self-ruled island.

General Wei Fenghe was speaking at the start of the Beijing Xiangshan Forum, China’s answer to the Western-dominated Shangri-la Dialogue held annually in Singapore. He also called on American leaders to drop what he said was a “Cold War mentality.”

His speech came just days after the US Navy sailed two warships through the Taiwan Strait, in the second such show of military support since July.

“Taiwan is China’s core interest,” Wei said. “On these issues, it’s extremely dangerous to challenge China’s bottom line repeatedly. If anyone tries to separate Taiwan from China, China’s military will take action at all costs.”

Taiwan has reemerged as a flashpoint in US-China relations as their trade spat aggravates a host of security disputes between the two sides. China has repeatedly protested US moves to bolster ties with Taiwan, amid a spat between Beijing and the island’s pro-independence government that took power after a 2016 election.

In recent months, the US has signalled a broader push back against China’s growing military reach in the region, with President Donald Trump vowing to outspend it in an arms race after his decision to withdraw from an anti-missile treaty with Russia.

The US has also criticised what it says are Chinese efforts to “militarise” outposts it has built on reclaimed land in the South China Sea, by building bases and deploying missile batteries.

Wei, who met US counterpart Secretary of Defence James Mattis at a regional security meeting Friday in Singapore, said military facilities were needed to protect Chinese interests in the South China Sea. Destroyers from the two navies nearly collided in the area last month during a US “freedom-of-navigation operation” to challenge what it says are illegal territorial claims by China and its neighbours.

“The South China Sea situation is stabilising, which proves that all countries can take care of their own affairs,” Wei said. “China opposes countries that come to the South China Sea from outside of the region in the name of freedom of navigation to show force and provoke, which leads to rising tensions.”

Mattis told his Chinese counterpart last week that the world's two largest economies needed to deepen high-level ties so as to navigate tension and rein in the risk of inadvertent conflict.

China has been angered by the US sanctions on its military for buying weapons from Russia, and by what Beijing sees as stepped-up US support for democratic Taiwan, which it claims as sacred territory. 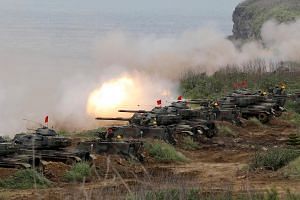 US concerned about China's pressures on Taiwan and in South China Sea: Defence official

China has also expressed concern after US President Donald Trump said Washington would withdraw from a landmark Cold War-era treaty that eliminated nuclear missiles from Europe because Russia was violating the pact.

China is not a party to that treaty, but Trump has also suggested Beijing’s military strength played a role in his decision, which China has described as “completely wrong”.

The minister said China had no interest in engaging in an arms race. He also denounced Trump administration claims that the Chinese government was attempting to meddle in the US  midterm elections, saying the accusations had “severely damaged” ties.

“It has been proven that a hegemonic and confrontational security model is outdated,” Wei said. “The world shouldn’t repeat the Cold War. All countries should respect each other’s sovereignty, security and development rights.”