BEIJING (XINHUA) - The rover and the lander of the Chang'e-4 probe have been awakened by sunlight after a long "sleep" during the first extremely cold night on the moon, the China National Space Administration (CNSA) announced on Thursday (Jan 31).

The lander woke up at 8.39pm on Wednesday, and the rover, Yutu-2 (Jade Rabbit-2), awoke at about 8pm on Tuesday, surviving their first lunar night after making the first-ever soft landing on the far side of the moon, said CNSA.

China's Chang'e-4 probe, launched on Dec 8 in 2018, landed on the Von Karman Crater in the South Pole-Aitken Basin on the far side of the moon on Jan 3.

A lunar day equals 14 days on Earth, and a lunar night is the same length. The Chang'e-4 probe switched to a dormant mode during the lunar night due to the lack of solar power.

Both the lander and the rover ended the dormant mode automatically according to the elevation angle of the sunlight. And the key instruments on the probe have started to work.

Currently, the rover is located about 18m north-west of the lander. Communication and data transmission between ground control and the probe via the relay satellite Queqiao (Magpie Bridge) are stable, said CNSA.

As a result of the tidal locking effect, the moon's revolution cycle is the same as its rotation cycle, and it always faces Earth with the same side. 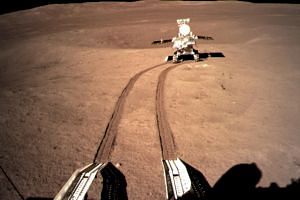 "The far side of the moon has unique features, and has never been explored on site, so Chang'e-4 might bring us breakthrough findings," said Zou Yongliao, director of the lunar and deep space exploration division of the Chinese Academy of Sciences.

During the first lunar day, the lander and the rover photographed each other, and a camera installed on the top of the lander took 360-degree panoramic photos on the surrounding of the probe.

"From the panorama, we could see the probe was surrounded by many small craters. It was really thrilling," said Li Chunlai, deputy director of the National Astronomical Observatories of China and commander-in-chief of the ground application system of Chang'e-4.

The scientific tasks of the Chang'e-4 mission include low-frequency radio astronomical observation, surveying the terrain and landforms, detecting the mineral composition and shallow lunar surface structure, and measuring neutron radiation and neutral atoms.