LONDON (REUTERS, AFP) - China will use its power to quell the Hong Kong protests if the situation deteriorates further after some protesters showed signs of terrorism, China's ambassador to London said on Thursday (Aug 15).

“Should the situation in Hong Kong deteriorate further... the central government will not sit on its hands and watch,” Ambassador Liu Xiaoming told reporters at a news conference in London.

“We have enough solutions and enough power within the limits of (the) Basic Law to quell any unrest swiftly,” Mr Liu said. “Their moves are severe and violent offences, and already shows signs of terrorism.”

"We hope this will end in an orderly way. In the meantime, we are fully prepared for the worst.”

Ten weeks of confrontations between police and protesters have plunged Hong Kong into its worst crisis since it reverted from British to Chinese rule in 1997 after being governed by Britain since 1842.

They have also presented the biggest popular challenge to Chinese leader Xi Jinping in his seven years in power.

The Chinese envoy also accused unidentified foreign forces of fomenting violent protests in Hong Kong, warning them that their “conniving” efforts had been noticed and that they would end up damaging themselves.

“Foreign forces must stop interfering in Hong Kong affairs,” Mr Liu said. “Stop conniving in violent offences - they should not misjudge the situation and go down the wrong path, otherwise they will lift the stone only to drop it on their own feet.” 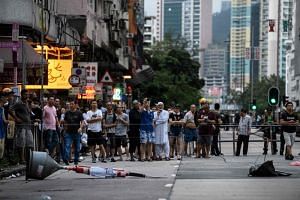 From silence to 'terrorism': Beijing's evolving rhetoric on Hong Kong

He added: “Evidence shows the situation would not have deteriorated so much had it not been for the interference and incitement of foreign forces. Hong Kong is part of China. No foreign country should interfere in Hong Kong’s internal affairs.”

“I think some politicians in this country... still regard Hong Kong as part of the British empire,” he said.

The Hong Kong protests were sparked by opposition to a plan to allow extraditions to the mainland, but have since morphed into a wider – sometimes violent – call for democratic rights.

It may take time for the Hong Kong government to convince the public that the now-suspended extradition Bill that sparked violent protests is in their interest, Mr Liu said.

“Whether it will be withdrawn, it is up to the Hong Kong government to decide. The chief executive promised to have a further communication with the public.

“I have said this is a good Bill that serves the interests of Hong Kong,” he added. “It will make Hong Kong a safe harbour of justice rather than a safe haven of fugitives.

“But it was not well understood, so it might take time for the SAR (Hong Kong) government to explain their position, to convince the Hong Kong public that it is in Hong Kong’s interests to have this Bill.”

Mr Liu also accused Western media of being unbalanced in its reporting and of confusing right and wrong.

“I am concerned. I wouldn’t want to see a violent crackdown,” he said, speaking in Morristown, New Jersey.

“If he (Xi Jinping) sat down with the protesters – a group of representative protesters – I’d bet he’d work it out in 15 minutes... I know it’s not the kind of thing he does, but I think it wouldn’t be a bad idea.”

Mr Trump said he had a call with Mr Xi scheduled “soon”.